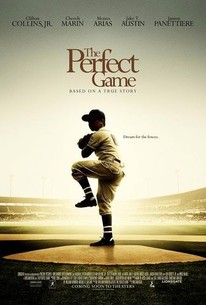 Critics Consensus: It's bogged down with an unfocused script and countless sports movie cliches, but The Perfect Game still manages to charm with its unabashed sweetness and a stirring final act.

Critics Consensus: It's bogged down with an unfocused script and countless sports movie cliches, but The Perfect Game still manages to charm with its unabashed sweetness and a stirring final act.

Critic Consensus: It's bogged down with an unfocused script and countless sports movie cliches, but The Perfect Game still manages to charm with its unabashed sweetness and a stirring final act.

Living amidst the gritty poverty of 1957 Monterrey, Mexico, a rag-tag group of boys from the other side of the tracks discovers the joy of sandlot baseball under the guidance of Cesar, an aspiring major league coach thwarted by discrimination. Armed with the dream of playing a real Little League game, the young team members defy a total lack of resources, disapproving parents, and widespread prejudice to score their first Little League victory on U.S. soil and find themselves at the beginning of a once-in-a-lifetime journey. Relying on their religious faith, a warm-hearted priest and their love of the game, the nine players and their coach embark on an incredible, record-breaking winning streak that leads them across the border to southern Texas, and all the way to the 1957 Little League World Series in Williamsport, Penn., where a miracle will cement their place in history and change their lives forever. Based on the true story of the 1957 Monterrey Industrials Little League team, "The Perfect Game" is an inspiring and heartwarming tale of faith and a testament to the resilience of the human spirit in the face of overwhelming odds.

William May
as Juan Zaraqosa

News & Interviews for The Perfect Game

View All The Perfect Game News

Critic Reviews for The Perfect Game

Notable only for being a catalog of just about every kid-pic cliche' ever committed to film.

Director William Dear is not one to miss a sentimental beat.

[From] the second minute of the movie I knew every single thing that was going to happen and there was not a single surprise.

It's an unabashedly corny but occasionally stirring dramedy based on the true-life story of scrappy young baseball players from Mexico.

So overwhelmed by its own based-on-actual-events tale that it can't find the tone to tell it effectively.

Anyone much older than, say, 10, will likely find the underdog saga sappy and manipulative, not to mention filled with sports movie cliches, including the following statement: "It will take a miracle to make them into a real team."

No ironic detachment for William Dear's latest film: It may have every cliché in the book, but The Perfect Game means everything it says.

It's all stencil work without a single touch of novelty, inspiration or originality.

The Perfect Game proves that you don't always have to reach for lofty heights to work. It's certainly not a classic. It's a simple pleasure for those times when that's all you need.

A welcome addition to the expanding genre of baseball films.

It's hard not to root for an underdog, especially a relentlessly optimistic one, and the reality is Game has a lot of heart. But not much in the way of legs.

Packed with everything you'd want from an inspiring sports story. The pieces aren't put together as neatly as one would hope, but the film easily achieves the intended effect.

Audience Reviews for The Perfect Game

The Perfect Game is harmless and good hearted but it feels too cliche and unmemorable to be an effective sports film.

I had read before that Mexico had won the Little League World Series in 1957 and 1958. What I hadn't read, was anything about this team. I had no idea what they had to go through just to make it happen. This could easily be considered the greatest baseball story of all time. They not only overcame the fact that they had never played organized ball before. They had to overcome financial issues, discrimination and not having a coach for a while. This team had some kids with real talent, and I think they won because they wanted it more. I thought the acting in this movie was a little forced, but it was not terrible. Cheech Marin does a good job playing the priest. It has some more famous child actors as well as Marin, including Jake T. Austin who plays Max on Wizards Of Waverly Place and Moises Arias who played Rico on Hannah Montana. I think all the kids do a pretty good job. The movie is supposed to have a relaxed, light-hearted and family friendly feel and it does. However, it does not have this in a cheesy way. It takes on racism, and shows how the Mexican team overcame racism not only for themselves, but for a black player from another team in a restaurant. It shows the impact that they left on the people who saw them play. A local Texas reporter who hates baseball eventually develops into a person who loves this team and wants to cover them at Williamsport. I like the part where they get advice from the groundskeeper, who turns out to be legendary Negro League player Cool Papa Bell. There were a lot of elements included in this movie that really make you think, that hold your attention and capture your imagination. I rented this from a Redbox and watched it twice before taking it back. This movie also made me want to learn more about the real life team and I found a lot of good articles. I would recommend this movie for any serious baseball fan, and for any family that is looking for a good film to watch together. It crosses that audience spectrum in the same way that The Sandlot, Angels In The Outfield, Little Big League and Rookie Of The Year do. This story/movie has become one of my favorites ever. Highly recommended. Don't expect an Oscar winner in production quality, but it's a great watch nonetheless. 2-10-14

A wonderful story, presented in a very hoaky, melodramatic way. A decent effort, but even I (who likes touching stories) found myself rolling my eyes in more than one scene. Another funny aspect to this movie: the kids from Mexico all talk English amongst themselves. However, when there is a scene with someone who only speaks English, they only verbalize in Spanish. That was very different.

We were very lucky to see this film even though the release was very scarce. The film stars Disney Channel stars Jake T. Austin (Wizards of Waverly Place) and Moises Arias (Hannah Montana). It also stars Hayden Panettiere's younger brother, Jansen Panettiere. Them and other young actors play poor kids from Monterey, Mexico who all love one thing...BASEBALL! Along comes a man who played for the St. Louis Cardinals who is willing to make the boy's dreams of comepting in the Little League World Series in Texas. They then embark on an uplifting adventure built around hope and teamwork. The Perfect Game is an uplifting, funny, and heartwarrming family film. The acting is great and the script is great! The young boys in the movie are believable and likale. This movie is highly reccomended. We think every family should see this!