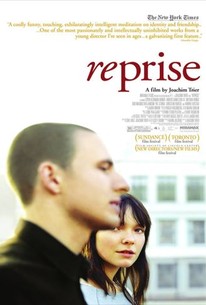 Critics Consensus: With Reprise, first-time director Joachim Trier effectively captures the spirit of young adulthood, and announces his arrival as a filmmaker to be watched.

Critics Consensus: With Reprise, first-time director Joachim Trier effectively captures the spirit of young adulthood, and announces his arrival as a filmmaker to be watched.

Critic Consensus: With Reprise, first-time director Joachim Trier effectively captures the spirit of young adulthood, and announces his arrival as a filmmaker to be watched.

Erik and Phillip are trying to make it as writers. Erik is rejected by publishers as lacking in talent, while Phillip's manuscript is accepted and the young man becomes a major name on the Norwegian cultural scene practically overnight. Six months later, Erik and his friends come to visit Phillip at a psychiatric hospital to bring him home after long-term treatment. Writing is the last thing on Phillip's mind, but Erik is continuing his literary attempts and tries to convince his friend to go back to writing.

Kari Feilberg-Jacobsen
as Guest at Party

This story about two aspiring writers in their early 20s has the fearlessness and vivacity of a first novel, and its playful approach to chronology and voice-over narration serves to amplify its themes instead of coming off as a show-off trick.

Reprise is not just about engaging with or surviving through the creative instinct. It is that instinct.

If you are young, male and dream of making a name for yourself in the arts, Reprise is about the joys and sufferings of that quest: It is a Jules and Jim for the punk-rock generation.

The jagged energy of this film's opening and closing moments leave you wondering where it might have gone and what it might have been.

The word 'Reprise' may mean recurrence, but Trier's fleet, joyously intellectual film comes at us like anything but a retread.

Drawing inspiration from the young-artists-in-angst tales of Godard, Truffaut and the French new wave, Joachim Trier's Reprise is both a charming homage and a vibrant work in its own right.

Embraces the old while forging brave new trails in the art form.

Trier is having more fun in the editing room than his story requires and he'd be well advised to spend more time in the deeper development and dramatic elements of his characters.

This is that rare film where a daring style is connected to real substance, and that's an exciting thing to experience in a first-time director.

Although there's no romantic triangle as in Francois Truffaut's classic 1961 film Jules and Jim, it seems obvious that film was an influence here.

In his first film, Trier comes up as a promising director, using a stylish approach to tell this refreshing drama about the literary youth - a solid film that has some good moments but fails to be more engaging, ending with an optimistic, perhaps too poetic conclusion.

A beautiful, poignant gem from Norway that is at once a loving tribute to the French New Wave and a wholly original story that riffs on familiar themes of friendship, romance, madness, and creativity in fresh, stylish ways.

[font=Arial][color=DarkRed]This very New Wave-styled Norwegian film manages to be thoughtful and intelligent, stylish without being vapid, touching, and it brilliantly captures the exuberance of youth on the cusp of adapting into maturity. [i]Reprise[/i] follows two best friends and aspiring writers; Phillip finds success immediately but cannot handle it, and Erik must fight through rejections. Director/co-writer Joachim Trier (cousin to Lars) has given the film a hypnotic triptych narrative structure, meaning there are flashbacks, flash forwards, flashbacks within flashbacks, and the viewer is best advised to just succumb to the thrills of the narrative and sort it all out later. The structure made me feel totally immersed in the lives of this small unit of 20-somethings. You get a lifetime of detail thanks to the tangential narrative structure and the help of an occasional narrator. The film has a remarkably deft touch when it comes to crafting realistic characters; the pangs of uncertainty, jealousy, and insecurity all ring true without being trite or obvious. But the movie never gets dour or pretentious as it covers weighty topics. The movie also has an indelible energy that is hard to ignore. [i]Reprise [/i]is playfully edited and constantly moving, sometimes forward, sometimes backwards, sometimes telling us a possible scenario that sounds better than reality. I found several small moments to be provocative, like Phillip trying to replicate the happy memories of time and place by trying to restage a photo of his girlfriend with his girlfriend (a lovely Viktoria Winge). [i]Reprise[/i] is full of small tender moments that speak volumes. This is a terrific film brimming with life and verve and clearly targets Trier as an inspiring filmmaker to watch. Nate's Grade: A[/color][/font]

[size=3]During the first third of "Reprise," a new film from Norway, I thought I was watching a masterpiece. During the second half, I felt I was watching a film made by a pretentious bore. That's quite a long distance to travel.[/size] [size=3][img]http://labuzzblog.com/wp-content/uploads/2008/05/reprise_galleryposter.jpg[/img][/size] [size=3]Director [b]Joachim Trier[/b], here making his film debut, is without doubt a supreme talent for the 21st century. He clearly has studied the films of Ingmar Bergman and Jean-Luc Godard, among others, and created a work of art in that vein that is at times breathtaking. But if Trier doesn't learn to put story and characters first and cinematic style second, his immense talent will be for naught. [/size] [size=3][img]http://fest07.sffs.org/i/stills/main/films/reprise.jpg[/img][/size] [size=3]Initially, "Reprise" has a laser-like focus on its characters, two men just out of college who aspire to be serious novelists. One mysteriously drifts into mental illness after becoming a literary sensation with his first novel. It is absolutely harrowing to watch his mind start to fray. But after about an hour the film runs out of things to say, and it becomes a celebration of itself. Look at me, I'm so innovative. Look at me, I'm so stylish. Look at me, I'm so artistically sophisticated. [/size] [size=3][img]http://img.metro.co.uk/i/pix/2007/09/reprise_450x250.jpg[/img][/size] [size=3]"Reprise" ends up becoming an advertisement for the director, as if the director were trying to prove that he's well-educated. This was very disappointing. [/size][size=3]There is something uniquely depressing about a super-talented artist getting full of him or herself. What a waste of talent self-congratulation is. No true artist would sink to self-aggrandizement. I hope Trier fell into this trap because of immaturity. I pray that he gets himself out of it as he matures. If he does, he could become the next Godard or Bergman.[/size] [size=3][img]http://www.dvdoutsider.co.uk/dvd/pix/r/re/reprse2.jpg[/img][/size] [size=3]At its best, "Reprise" beautifully captures the vim and vigor, as well as the confusion, of intellectual youth. The protagonists have a tremendous amount of artistic inspiration, and the film itself seems to embody their inspiration. With all its jump-cutting and experimentation with sound and editing, it sumptuously brings to life the world of the young artists.[/size] [size=3]It also takes exciting risks in presenting the immaturity of young artists, rather than completely lionizing them. The two protagonists are part of a larger group of young men, and the film gradually starts to widen its lens to explore these other characters. We hear the most ridiculously misogynist ideas get presented by some of them, and then we watch some of them make absurd decisions in an attempt to live up to these silly ideas.[/size] [size=3]I like the idea of showing smart characters succumb to stupidity. But this is the point where the film began to come undone. It became kind of silly. We started laughing at the characters, but I wasn't sure what the deeper meaning of this laughter was. The film started losing its way, relying on shallow, predictable humor. The more the film started to make fun of its characters, the more I began to disengage. [/size][size=3]As the content thinned, the heavy style (jump-cutting, for example) began to feel more like a gimmick than a meaningful way to explore an idea.[/size] [size=3]Despite its flaws, "Reprise" is worth seeing. If this director develops properly, we could end up looking back at 2008 as the year we first saw a Trier film. That's how much potential he has. He could represent the return of auteurist cinema to Europe in the 2010s.[/size]