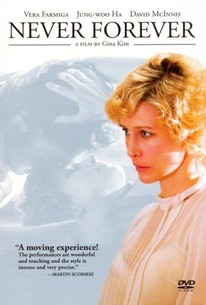 Korean filmmaker Gina Kim directed this erotic drama about a woman's dangerous response to her husband's fertility issues. The Departed's Vera Farmiga stars as Sophie, an American woman married to Korean-American Andrew (David McInnis). When Andrew's inability to impregnate Sophie leads him to attempt suicide, Sophie seeks the help of a fertility clinic, but is turned away. Desperate to save her marriage, she begins paying Korean immigrant Jihah (Ha Jung-woo) for sex, in hopes that she'll become pregnant and Andrew will be none the wiser. As on might expect, though, the relationship between Sophie and Jihah evolves into something more than either bargained for.

If Adrian Lyne directed a racy Lifetime movie, then asked Danielle Steel what to call it, you'd pretty much have Never Forever, a sudsy chamber piece that's engrossing despite its many plot holes and contrivances.

It's like a Lana Turner vehicle that's too meek to be Last Tango in Chinatown.

Never Forever has the steaminess of pulp and the stateliness of art.

Farmiga elevates the material of this melodramatic soaper into something nearly profound.

While Never Forever lingers in the thick of sex, lies and anxiety, it is something to see.

Never Forever has a lot going for it; it's just a shame its inner trashiness is concealed.

For a film as gentle, meaningful, and tender as Never Forever, the picture can be forgiven such old-fashioned melodramatic extravagance to make a lasting impression.

The indie version of a Harlequin romance

An engaging, sexy film the punctuates one of the many unusual ways that women today can become pregnant.

Every scene is powerfully packed with conflict, and the movie races along to a very uncertain climax.

Sad movie that begins with a couple unable to deal honestly with one another. The young, beautiful wife feels powerless to help her husband out of his funk over his inability to produce an heir until she hits on a plan. The plan backfires when she develops feelings for the young man she selects as the surrogate father. The entanglements lead to a powerful, sad conclusion and we are left with the vague feeling that everything has worked out for the best. There is a religious element in this film that helps to explain the couple's inability to talk about their problems and that aspect felt real. There are a couple of scenes where, as the illicit relationship became more intimate and personal, Ms Farmiga's character, radiantly beautiful, almost ethereal, as the emotionally fragile wife, became more inhibited when they came together. This viewer is not sure what was lacking, but something prevents me from giving this film a higher rating. However, not a film I will easily forget, either.

[font=Century Gothic]"Never Forever" starts with the funeral of Andrew's(David McInnis) father. Even though they are very well off, things have been rough for Andrew and his blonde wife, Sophie(Vera Farmiga, who is superb), lately due to her not being able to conceive a child due to Andrew's sterility. His devout Christian family of Korean origin prays for them constantly, an activity Sophie has little practice with. One day, she notices Jihah(Jung-woo Ha) at the fertility clinic who has his sperm rejected because he has overstayed his visa from Korea. She follows him to Chinatown but does not approach. But Andrew's suicide attempt drives her to the desperate action to make a direct appeal to Jihah...[/font] [font=Century Gothic][/font] [font=Century Gothic]"Never Forever" owes more than a little to "Lady Chatterley's Lover," especially in its depiction of sex and class issues. Even though Sophie and Andrew are both of the affluent classes(maybe they met at college?), there is still a cultural gap between them which pushes Sophie onto a path away from her normally sterile existence that would have been unthinkable just a short time before. And while it may never hurt to pray, real results come when you take things into your own hands.[/font]