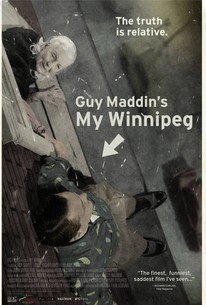 Critics Consensus: My Winnipeg is a charmingly irreverent 'docu-fantasy' from the unpredictable mind of Guy Maddin.

Critics Consensus: My Winnipeg is a charmingly irreverent 'docu-fantasy' from the unpredictable mind of Guy Maddin.

Critic Consensus: My Winnipeg is a charmingly irreverent 'docu-fantasy' from the unpredictable mind of Guy Maddin.

Visionary Canadian filmmaker Guy Maddin pays tribute to his beloved hometown with this goodbye letter and self-described "docu-fantasia" that is equal parts transcendental rumination, historical chronicle, and personal portrait. In the first segment, Maddin's camera drifts dreamlike through crowded trains as a floating kielbasa hangs from the ceiling and the director/narrator ponders just why the city boasts the most sleepwalkers per capita of any major international city. Later, the viewer is treated to images of numerous historical monuments in the city as they learn about such key historical events as the Winnipeg General Strike, the defeat of the Winnipeg Jets, and even the Golden Boy pageant scandal and a racetrack tragedy that found numerous horses sent to an icy death. As the third and final segment gets underway, the director draws inspiration from filmmaker William Castle to present pivotal -- and often traumatic -- events from his childhood that left an indelible mark while simultaneously serving to mold his unique vision of his beloved Winnipeg. ~ Jason Buchanan, Rovi

Guy Maddin
as Narrator
View All

Critic Reviews for My Winnipeg

Guy Maddin docu about his hometown gives fans everything they'd expect, plus a few moments of unexpected sincerity.

Maddin is a real film-maker with a confident, fluent movie language that is evolving in fascinating directions.

The best way to take My Winnipeg is with a box of popcorn and a grain of salt.

This is a secret history, and it's a wonder.

My Winnipeg is a mobile collage, and its assemblage is fascinating.

Occasionally uneven and often opaque and aimless, but it is clear Maddin knows what he's doing. And by the time it is over, he has transported us not just to Winnipeg, but into the heart and soul of an artist.

More an abstract hallucination than a photo-realist portrait, My Winnipeg would be out of place on the "documentary" shelf at the video store. But it deserves prime placement in the Guy Maddin canon.

There's some genuine archival history threaded through the fantasy.

...there is no denying that Maddin is pushing not only himself as an artist...

Guy Maddin has never tipped quite so far in the direction of autobiography as he has with My Winnipeg, and the effect is unexpectedly charming.

With his thrilling new documentary portrait of his hometown -- or rather, his new "docu-fantasia" -- Guy Maddin proves that you can go home again.

Audience Reviews for My Winnipeg

One of the most inventive, unique, surreal, contemplative movies I have ever seen.

A visual poem about... well, Winnipeg. A fascinating projection of Guy Maddin's memories and personal mythologies about the city where he was born and raised, juxtaposed upon a fantastical recount of historical facts and urban legends with his trademark silent film aesthetic, grainy and ethereal. It's self-indulgent perhaps, but watching it is enrapturing like discovering a completely new world. A perfect example of how realities become extraordinary when observed through an extraordinary prism.

It sounds weird, but this is just the type of film I'd make if I were a filmmaker. It's like the dude voiced out my deepest, darkest, insomniacest sentiments and filmed it in a sort of hyper-nostalgic, Caligari surreal docudrama. It's a perfect homage to a weirdo town and you get the feeling the guy really, really loves living there. This is a GOOD movie.