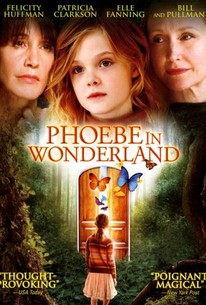 Critics Consensus: Blessed with a good cast, Phoebe's heart is in the right place, but its execution is dicey.

Critics Consensus: Blessed with a good cast, Phoebe's heart is in the right place, but its execution is dicey.

Critic Consensus: Blessed with a good cast, Phoebe's heart is in the right place, but its execution is dicey.

Felicity Huffman, Elle Fanning, and Patricia Clarkson star in director/screenwriter Daniel Barnz's illuminating tale of parenting and growth concerning an exceptional young girl whose troubling retreat into fantasy draws the concern of both her dejected mother and her unusually perceptive drama teacher. Phoebe (Fanning) is a talented young student who longs to take part in the school production of Alice in Wonderland, but whose bizarre behavior sets her well apart from her carefree classmates. Her mother (Huffman) is an aspiring academic who is beginning to feel like she has not only failed in her professional career, but as a parent as well. Though Phoebe's gifted drama teacher (Clarkson) has no doubts about the young girl's talent and capacity for learning, the frustration of seeing such a promising student slowly slip ever further away from reality soon becomes a growing concern both at home and at school. ~ Jason Buchanan, Rovi

News & Interviews for Phoebe in Wonderland

View All Phoebe in Wonderland News

Critic Reviews for Phoebe in Wonderland

It needs the power of imagination to be done effectively and I just didn't think it was here.

I thought this was delightful, a little depressing at times but with three stellar performances from Fanning, Huffman, and Patricia Clarkson.

Though Phoebe is nearly too dark for children and nearly too simple for adults, it succeeds as a swirling reminder of what it felt like to get lost in imagination

[Elle Fanning is] an astonishingly natural and unmannered actress who carries this rather ungainly movie on her narrow shoulders.

Barnz has made a poignant family movie that, despite its thematic material and brief profanity, is appropriate for mature 10-year-olds and older.

Elle Fanning is vivid in her conveyance of the hurt, anger and loneliness of being different.

An interesting look at a little girl's struggle to control her disease.

The whimsical and outlandish flights of fantasy are what initially grab the attention, but the greatest virtues are the authentic performances by the cast.

An off-putting, misguided disease-of-the-week picture that tries to disguise itself as something else before finally coming clean.

[The movie] resists being pigeonholed or easily labeled -- because, like Phoebe herself, the movie is brilliant and a little strange and wonderfully unique.

Audience Reviews for Phoebe in Wonderland

The film's strength lies in its candid portrayal of a young girl afflicted and in Elle Fanning's Phoebe. Full review later.

"Elle Fanning is every bit as talented as her older sister Dakota. She gives a great performance in Phoebe in Wonderland. Phoebe is a young girl suffering from OCD and Tourrettes syndrome. But it takes awhile for her to be diagnosed. I thought the parents to be in complete denial and putting blame on everyone but themselves, even though there is no one to be blamed. The performances is what really brings this film together. I loved Patricia Clarkson in the film as well as Elle Fanning. They both stood out for me and made the film."

A troubled ten-year-old gets cast as Alice in the school play version of Alice in Wonderland and copes with the pressures of growing up different than her peers. Stellar performances by everyone in the cast carry this film. Elle Fanning has all the natural charm her sister has and is equally wise beyond her years. Felicity Huffman and Patricia Clarkson are also quite good, and Bill Pullman has moments of emotional expression that are rare for him. I liked that that film took its characters seriously and that this didn't attempt to be a contemporary re-telling of Alice in Wonderland. Rather, the film is about a child coping with what could be either eccentricity or mental illness, and for the characters in the film, the line between those two conditions is as fluid as it should be in real life. Aside from the principal, there isn't a villain (even the principal is more of a weak douche than a true villain), just people of different perspectives trying to resolve the Phoebe's problems. I didn't like the ending, and I thought that Phoebe's antics occasionally got petulant, making her character less identifiable. Overall, Phoebe in Wonderland is a strong, sensitive drama about growing up different with just the right touch of Lewis Carroll whimsy.

This is NOT a childrens' movies. Don't go to Red-Box see the cover and think "O how sweet! A new Alice in Wonderland with Dakota Fannings' little sister!" That is a falsehood! Bad adevertising. Let me tell you what this movie is actually about. Phoepe (fanning) Has always had trouble following the rules and was always told by her mother that being different is a good thing. As she enters 3rd grade (i think) she finds following the rules harder than usual. Spitting on her classmates and yelling out whatever she thinks. He Mother (Huffman) is attempting to write a book on Lewis Carol and his infamous book, but finds starting the book hard while dealing with two extremely immaginatve young girls and an unsupporting husband. Phoebe finds refuge in her class play Alice in Wonderland where she is cast in the title role. She befriends her director, wonderfully played by Patricia Clarkson. But as her parents push her farther into therapy and trying to understand their daughters unruliness, Phoebe goes further down the rabbit whole and further away from reality. This is definitely a PARENTS movie. I really enjoyed it. The performances are raw and believable. A bit long but it had good closure to the ending.