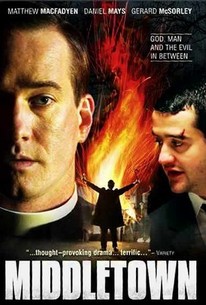 Brian Kirk's gothic thriller Middletown excoriates the actions and attitudes of the Irish Catholic clergy by honing in on one psychotically deranged fire-and-brimstone preacher. Matthew MacFadyen is Gabriel Hunter, a priest fresh from missions work in Africa. After 15 years of service in the field, Gabriel returns to his hometown in Ireland to occupy the now-vacant pulpit. Once there, he re-encounters three members of his working-class brood: his father, Bill Hunter (Gerard McSorley); his younger brother, the service station attendant Jim (Daniel Mays); and Jim's expectant wife Caroline (Eva Birthistle), who runs the local speakeasy. The family welcomes Gabriel home, but from the first moments of his arrival, he projects a violent, hair-trigger temper; relentless, psychopathic bursts of unchecked anger; and a sadistic obsession with inflicting pain and cruelty on everything and everyone around him -- from squelching live mice beneath his heels to strangling the neck of a chicken that he seizes during a cockfight. From the pulpit, Gabriel uses sermons to relentlessly damn the members of his congregation for their sins, including all activity at the local pub, which he perceives as a den of iniquity. When Gabriel hears Caroline's refusal to have her child baptized, the statement pushes him completely over the edge and triggers a string of increasingly violent acts that will bring the entire community to its knees -- and threaten the lives and safety of Bill, Jim, Caroline, and the newborn baby. Daragh Carville authored the script. ~ Nathan Southern, Rovi

There are no critic reviews yet for Middletown. Keep checking Rotten Tomatoes for updates!

There are no featured audience reviews yet. Click the link below to see what others say about Middletown!