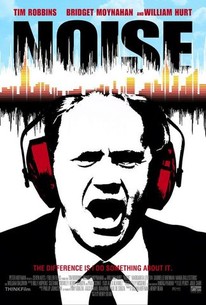 Critics Consensus: Noise starts with an interesting premise, but fails to build it into a cohesive whole.

Critics Consensus: Noise starts with an interesting premise, but fails to build it into a cohesive whole.

Critic Consensus: Noise starts with an interesting premise, but fails to build it into a cohesive whole.

Tim Robbins, Bridget Moynahan, and William Hurt star in writer/director Henry Bean's topical urban comedy following one man's quest for a little peace and quiet in the big city. The noise was bothersome when David Owen (Robbins) first moved to New York City, but back in those early days it was almost endearing in an odd sort of way; a forgivable manifestation of urban vitality, or so he had led himself to believe. These days the incessant barking of car alarms, traffic, and frustrated commuters seems to be driving David insane, never allowing him the opportunity to concentrate or focus on the task at hand. While this distraction is at first only bothersome on a superficial level, however, the thing that really riles David is that he is completely powerless to remedy the problem. As the days go on and the noise on the street seems to amplify in David's ears, he makes the decision to take up arms against the unseen intruder. Initially, David is content to simply let the air out of tires or leave notes on windshields when the owners of cars fail to turn off their alarms. When this approach fails to yield acceptable results, David's subversive urban sabotage techniques quickly evolve into full-blown acts of vandalism. Eventually, David is caught in the act and arrested by the police. After spending a night in jail, David confesses to his wife that he is in fact the urban folk hero who has come to be known by the public as "The Rectifier" for his repeated attempts to hold those responsible for urban noise pollution accountable for their auditory transgressions. When his wife voices concern about such extreme and irrational behavior, David dutifully agrees to give up his career as a noise-fighting vigilante. But try as he might, David simply cannot repress his lingering urge to strike back against such a formidable enemy. ~ Jason Buchanan, Rovi

How can you resist a hero who gets worked up because a car alarm disrupts his extremely tenuous grasp on a difficult but life altering passage of Hegel?

Amid the seasonal din of so many raucous summer blockbusters, Noise offers blessed relief in the form of a strong central performance, sharp dialogue and edgy humor.

The black comedy Noise may be a one-joke movie but it's a resonant one.

A tale of obsession and vigilantism cut with humor and a little Hegel, Henry Bean's Noise is a satisfyingly screwy New York story in which a successful businessman/family man jettisons all because he can't stand the cacophony on the street.

It's wickedly amusing for a little bit, but ultimately the film becomes what it's fighting: just noise.

Could have and should have been a demented little gem, but as it is, it's just a muddled, sloppy, and often incoherent little rant about New York...

Having hooked us with the tagline, director Henry Bean never seems to be sure quite where to run with it.

Bean's scenario is too inconsequential to take seriously and not outlandish enough to entertain.

Even at the movie's climax, Saville wants us to keep looking at the characters

full of interesting motifs and symbolism, making a curious statement about detachment from one's surroundings, no matter how thrilling they may seem to outside observers.

An entertaining comedy with dashes of sex, all served up by a top cast

A little comedic gem that asks "what bothers you about society" and then " why aren't you fighting against it?" Not laugh out loud funny, but certainly an interesting afternoon.

Netflix identifies this as a comedy, but there wasn't a funny frame in the whole film. Even as a dramatic film, it's muddled, as though the director and writer didn't know what the film was about. At the end, neither do I. We're given no reason for Owen's eventual transformation or his obsession, and the motivations of the women around him are equally mysterious. In the end, this is the poorest imitation of Taxi Driver that could possibly be concocted. Although, despite the bad hair piece, William Hurt flawlessly transforms himself into the smarmy, impossible-to-like mayor. Yet another great performance by Hurt in a poor film.

CAST: Tim Robbins, Bridget Moynahan, Margarita Levieva, Gabrielle Brennan, William Baldwin, William Hurt, Maria Ballesteros DIRECTED BY: Henry Bean SUMMARY: A man who is being driven crazy by the noise in New York City decides to take vigilante action against it. MY THOUGHTS: "Strange, funny, & definitely different. Tim's character is a bit moronic. Not a great film, but not completely bad either. The acting is great, as it always is when it comes to Tim Robbins. I'm certain some can relate to why he's annoyed and upset, but most probably won't go to the extremes his character does."

was this a comedy? weak. some semi interesting ideas that lacked focus and edge. barely kept my attention