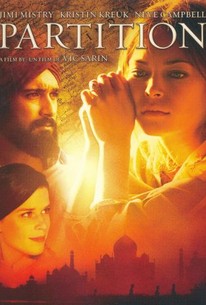 Critics Consensus: A disappointing melodrama focussing on the partition of India and Pakistan. Strange cross-culture casting doesn't help the pedestrian script and direction.

Critics Consensus: A disappointing melodrama focussing on the partition of India and Pakistan. Strange cross-culture casting doesn't help the pedestrian script and direction.

Critic Consensus: A disappointing melodrama focussing on the partition of India and Pakistan. Strange cross-culture casting doesn't help the pedestrian script and direction.

In a time when India and Pakistan are being torn apart, true love still manages to take root despite the fear and intolerance that blights the troubled landscape. The year is 1947, and as India and Pakistan are split into two separate states the rivers run red with blood. Gian (Jimi Mistry) is a Sikh and former soldier who risks his life to rescue young Muslim Naseem (Kristin Kruek) from a rampaging mob. As this unlikely pair begins to realize their true feelings for one another, the bond between them helps to heal the tender wounds of war. But what chance does true love really have against the destructive force or religious zealotry?

Rajesh Khera
as Arjuna
View All

It is, however, watchable throughout as a document about the individual human tragedies that the advent of Partition threw up.

If feeling alone were the benchmark of great art, Vic Sarin's film would be considerable, but the screenplay is desperately poor and the direction leaden.

The film is breathless, big-canvased and scored for big emotions: a pavilion of the heart and senses threatened only when characters open a flap to let in anachronistic dialogue or the giveaways of cross-culture casting.

Dull historical epic set during the Indian massacres of 1947.

But this is a film that lumbers under its epic ambitions and at nearly two hours long - with some awkward plotting to boot - scenes drag, grand and momentous, but crushing anything so fragile as human feelings.

It's the taboo and tender romance between Mistry and Kreuk that will shift the serious tickets.

Set in the years surrounding independence in India, this slightly melodramatic film has a strong emotional kick that manages to bring both the romance and the religious-political situation vividly to life.

In short, Partition is a watchable slice of melodrama that's worth seeing for the performances of the three leads.

Sarin acts as his own DoP and the lensing is unsurprisingly ace, but he's at a loss when it comes to injecting pace and tension. Bollywood's Gadar told the same story better in 2001...

Mistry and the Canadian-born Kreuk deliver workmanlike performances even if the film has the feel of the Sunday night TV movie.

A brave if earnest attempt to articulate historical issues that remain pertinent.

Partition is an absolute masterpiece in cinematography, with a compelling continuing story of emotions, historical cultural divide,the human need to love and be loved regardless of the events of the world around us. A masterpiece in independent film-making, the director Vic is an absolute master of his art, through the medium of film he has bought alive the mainly forgotten and least problems of the situation on the India and Pakistan borders. His actors are pure actors from the heart and take us on a unforgettable journey as the story unfolds. A worth to watch.

An ultimate love story with a tragic ending, but so beautiful and endearing. It's very well written and the acting is superb by all the cast, and I absolutely love this movie.

A beautiful movie!! Great story plot about two individuals who fall in love, and marry, in India during 1947. One is Sikh and the other Muslim, this movie follows their story together. Jimi Mistry stars in this drama, it is definitely fantastic to see him in a film once again. Kristin Kreuk and Neve Campbell co-stars in this amazing movie, and both are phenomenal! Great scenery, beautiful music.