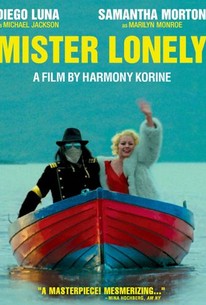 When a Michael Jackson impersonator (Diego Luna) living in Paris falls for a Marilyn Monroe impersonator (Samantha Morton) during a performance at a retirement home, the lovestruck pair retreats to a seaside castle in the Scottish highlands populated by a commune of reclusive impersonators. Earning a living can be a difficult endeavor in the City of Lights, and in order to make ends meet, one man has turned to mimicking the King of Pop. One day, while doing the moonwalk in an old folks home, Michael meets a beautiful Marilyn Monroe look-alike. When Marilyn suggests that Michael join her in traveling to the Scottish Highlands and move into a castle populated entirely by celebrity doppelgangers, the would-be gloved one readily accepts her invitation. Shortly after arriving at the castle, Michael and Marilyn find the commune preparing for their first-ever gala -- a lavish affair featuring appearances by Abe Lincoln, the Three Stooges, Buckwheat, Shirley Temple, Madonna, Sammy Davis Jr., and Charlie Chaplin. ~ Jason Buchanan, Rovi

James Fox
as The Pope

Anita Pallenberg
as The Queen of England

Korine has found an evocative subject, but he remains entirely too cavalier in this attitude towards narrative coherence.

In contrast to the grimy and occasionally grotesque Gummo (1997) and Julien Donkey-Boy (1999), this drama has a more gentle, Felliniesque feel.

The film doesn't work, and indeed seems to have no clear idea of what its job is, and yet (sigh) there is the temptation to forgive its trespasses simply because it is utterly, if pointlessly, original.

A movie that goes to extraordinary lengths to say ordinary things.

Korine falls so thoroughly in love with many of his images, including his opening shot, that he stretches them out in hypnotic slow motion.

Like Francis Ford Coppola's Youth Without Youth, the film has overarching problems yet contains diamonds of clarity and inspiration that you won't find in any dozen movies. You'll have to mine for those diamonds, though.

A film that exists squarely in its own peculiar reality, where the Queen of England sleeps with the Pope, eggs can sing, and nuns can fly.

Mister Lonely could have been a sparkling, carefree character piece. Instead, partially due to its flat and mainly joyless visual style, it deteriorates into a sour mess that feels a lot longer than its 112 minutes.

Besotted with its own playfulness, Mister Lonely gives off the distinct impression that it was a lot more fun to make than it is to watch.

It's movies like this that the art house was made for.

Very quirky, strange, and somber (almost dream-like), with sporadic moments of greatness. Harmony Korine's "Mr. Lonely" is a gem and unlike anything else out there. Sure, it lacks any sort of cohesion or common logic, but every now and then a film can throw these staples of cinema out the window and still deliver a worthwhile and enjoyable experience. This film does just that, and that's no easy feat.

Uh, it was all right. I didn't exactly understand it, and it's too super indie for me, without being cutesy.

I was very divided on this one. Some of it I loved and thought it was very beautifully framed. Other bits, like the "flying" nuns, I couldn't stand, and thought it was pointless to the film and ruined it. I liked what it had to say about identity and alienation, but I'm not sure it was entirely successful getting it across. Samantha Morton was great as "Marilyn", and the guy who plays "Michael Jackson" also great, but some of the other characters were such caricatures, (which I guess is a given in a film about impersonators, but still...), as to be unlikable and irritating.