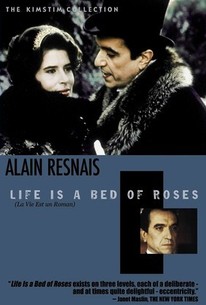 With Life is a Bed of Roses, filmmaker Alain Resnais wanted to create a lighthearted tribute to three important French directors, each of whom defined a particular era in his country's cinema Melies (the first French filmmaker to use narrative--his most famous film is A Trip to the Moon), the impressionist L'Herbier (most famous for his inspirational avant garde work during the '20s) and Rohmer (most famed for his sextet of "Moral Tales" during the '60s). To present his chronicle of the human quest for a utopia of personal happiness and fulfillment, Resnais created two distinct narratives representing the past and present, and then interspliced them with a third more fantastical tale to provide contrast. Representing the past, the first tale centers on a monied eccentric who creates a "temple of happiness' in his chateau. There, guests are given a special potion, laid inside enormous cribs and surrounded by pleasant sensations to help them return to the blissful state of infancy. The second story takes place in the same chateau where a symposium on the techniques and philosophies of the eccentric are hotly debated and elaborated upon. Weaving its way between the two tales is the third, which represents the medieval fantasies of children in a forest who imagine the struggle between a wicked king and a brave good-hearted warrior. ~ Sandra Brennan, Rovi

Critic Reviews for Life is a Bed of Roses

Resnais speculates on the utopian dream that life is infinitely perfectable, that human chaos, despair and horror can be spirited or educated out of existence. There are two stories, to correspond to each of these possibilities.

It's more memorable for various isolated witticisms and images than it is as a coherent whole. And its flightier touches can be deadly.

The material manages at once to be both precious and dry, the staging is unprofitably claustrophobic, and the structure less ingenious than arbitrary.

A unique and funny film from intellectual French director Resnais.

Utopia is folly, though human fluidity here is the stuff of both Wagnerian myth and Gallic farce

Resnais raises more questions than he answers in this fascinating three-section parable about utopianism, education and love.

What happens when a skeptic tackles tranquility? He makes it look dangerous.

Audience Reviews for Life is a Bed of Roses

There are no featured audience reviews yet. Click the link below to see what others say about Life is a Bed of Roses!

Life is a Bed of Roses Quotes