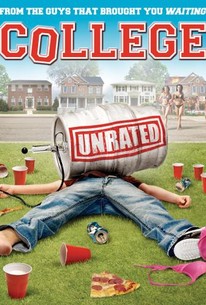 Deb Hagan directs this comedy set in the world of higher education and starring Drake Bell, Kevin Covais, and Andrew Caldwell as three high-school friends who take a weekend trip to nearby Fieldmont University as prospective college freshman in order to find out just how wild things can truly get on campus. Initially taken in as pledges at the most notorious fraternity on campus, Kevin, Morris, and Carter are subjected to humiliating series of pranks cooked up by womanizing frat president Teague (Nick Zano). Despite the fact that the three pals are forced to endure some of the most mortifying pranks ever committed against a fraternity pledge, in exchange for their suffering they are grated complete access to the rowdy party scene. Later emboldened after being mistaken for college freshmen by a trio of beautiful sorority girls, the three pals find any hopes for getting lucky dashed when -- upon realizing that the boys have finally managed to chat up some pretty girls -- Teague and his crew ramp up the intensity of their embarrassing initiation rituals and threaten to expose the boys' true educational status. But these scheming frat boys have underestimated the ingenuity of their high-school guests, and before the weekend is over Kevin, Morris, and Carter hatch a brilliant plan to turn the tables on their tormentors, win the girls, and destroy the fraternity once and for all. ~ Jason Buchanan, Rovi

Nathalie Walker
as Amy
View All

50 Worst Summer Movies of All Time
RT’s Summer in Review: The Best, The Worst, and Our Favorite Films!

If college were really like this, everyone would drop out and found Microsoft.

I thought it was dreadful from start to finish.

Not only would I not see this movie, I wouldn't see any movie playing in the same multiplex.

A tedious, by-the-numbers raunch-fest that exists strictly because it can.

A raunchy comedy that plays like a Superbad without the smarts, the heart, the originality or the laughs.

Film critics never come home stinking of their honest labor, but the nearest equivalent is covering something like College, which leaves its stain on one's very humanity.

College is painfully stale, pathetically unfunny, and I can't think of a single reason why you should sit through [it].

Deb Hagan takes an adolescent rite of passage and turns it into a primer on collegiate sadism, pushing the R rating to new raunchy lows in the process.

So full of nastiness and cruelty that it's hard to believe anyone would find joy in it.

Came across this last night on TMC [The Movie Channel]. I forogt this movie even existed, but, I was bored so I decided to watch it. ISure, the movie has a couple laughs but this is the kind of movie you can compare to "Superbad". Welll....I really hated "Superbad" and I feel as if "College" has a little more to offer. "College" is more raunchy and disguesting, sometimes a little too disguesting, but overall, I'd still recommend this over "Superbad".

Just saw this a couple of days ago at my cousin's house. This is apparently one of his favorite comedies, which now makes me question weather or not we are actually related! This is the lamest, dumbest, most obnoxiously poor excuse for a comedy I've seen since DATE MOVIE. What an insulting pile of dreck. I expected it to be bad... but not this bad. How did this get a theatrical release? It's just beyond me...

This film is hilarious to it's core, but it's plot sucks ass!

It has your typical crude humor. More towards the male audience with their fantasy world of "college".