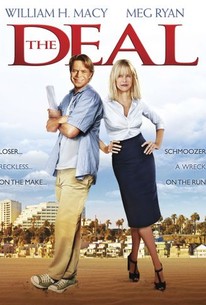 His career in an uncontrollable downward spiral, a hapless Hollywood producer cons a major studio into financing a $100 million action film following the adventures of 19th century British Prime Minister Benjamin Disraeli, only to find his swindle taking a sudden turn for the worse when his star is kidnapped and the production is shut down. Now left with few other options for resuscitating his flat-lining career, the producer aligns himself with a well-connected Hollywood studio executive in a clandestine attempt to finance another, wholly different film by utilizing the blocked studio funds. William H. Macy and Meg Ryan star in The Wool Cap director Steven Schachter's comic look at the twisted side of Hollywood politics.

Critic Reviews for The Deal

Unfortunately, the characters seem to be doing all the laughing, while the general public has nothing to cling to but the horndog flirtation between mismatched leads William H. Macy and Meg Ryan -- hardly ideal ingredients for mainstream success.

The Deal could have had a more solid impact with a leaner script shaving off some of those subplot detours. And can we drop those lewd seduction routines in these movies already that hello, would never get the babe in the real world.

Audience Reviews for The Deal

"Hey, we're in the entertainment business, right? So, I'm entertaining myself!" Williams H Macy stars as a down-and-out film producer Charlie Berns whose career in an uncontrollable downward spiral. He cons a major studio into financing a $100 million deal on a script he hasn't even read. Along the way, Charlie meets his match in Deidre Hearn, a sharp-witted development executive who sees right through his games while simultaneously admiring his indifferent personality. Despite their loathing attitudes toward each other, Berns and Hearn lock in the movie deal by signing Bobby Mason (LL Cool J), a newly converted black Jewish action star but the swindle takes a sudden turn for the worse when his star is kidnapped and the production is shut down so the producer hatches a scheme with Hearn to save the star and the movie.

Couldn't hold my attention well. It was okay and funny, but not something to watch again.