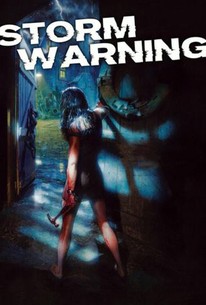 A romantic weekend on the water turns into a terrifying struggle for survival when bad weather drives a vacationing couple into an isolated swamp in Urban Legend director Jamie Blanks' tense tale of terror down under. Forced to steer their sailboat to the nearest shore when a storm rolls in and the waters grow treacherous, a young couple has no idea of the depravity they will soon be forced to endure. Shortly after docking their sailboat on a remote island, the stranded pair is captured by a psychotic man and his two demented sons. As the storm gathers ferocity, the couple fights against being sexually enslaved and brutalized to the breaking point. But these maniacs don't have a clue how hard their prisoners are willing to fight in order to stay alive, and as the tables are turned the violence escalates into a visceral explosion of savagery and terror.

... you do not have to be a gore-lover to love this movie.

The film moves along at a crackling pace and the action shifts slickly from gathering menace to outrageous violence without missing a beat.

Derivative, obvious, and simplistic, but it's also shot with a lot of style, edited with a lot of kick, and (best of all) it knows just when to deliver its goods and roll the credits.

[img]http://images.rottentomatoes.com/images/user/icons/icon14.gif[/img] Storm Warning is nothing less than a perfectly above average exploitation film. It's something that gives it's audience just what they would expect from it and gets the job done perfectly. There was a lot of talent pitched in to make this film. Particularly Everett De Roche, one of the pioneers of Ausie exploitation horror who wrote Roadgames and Razorback, and also Long Weekend and it's remake. Which coincidentally shares the same director Storm Warning has, Jamie Blanks. He does his absolute best with the nuts and bolts plot and the budget he is given and crafts a solid and enjoyable gorefest for horror fans and non-horror fans. The film shifts from atmospheric to wildly bloody to great effect and boasts a talented unknown cast who take the script seriously enough to make a very tense low-budget thriller. It's effective finale is really worth waiting for, and the setup itself draws inspiration from various other classic pieces of work such as The Hills Have Eyes and The Texas Chainsaw Massacre. Having said that it can't argue that it's original and it certainly can't grasp any subtext beneath the wince-inducing gore, but overall if you like Ausploitation, your going to love Storm Warning, it's incredibly ruthless, and even more so insanely under rated.

A pretty good low budget horror from the makers of Wolf Creek. In the vein of the Texas chainsaw massacre. A young couple lost after a trip out on a small boat seek out some shelter only to come across some very odd rural folk. Slow start but a bloody and tense ending make up for it.

This Film is put out by Dimension Extreme and Resolution Independent, one can always count on them to put out a pretty gory film, this is no exception. This movie also won the 2007 Screamfest Special Makeup Award, and after viewing One can see why. Excellent bloody scenes in the last 20 minutes. This is about a couple who get lost while fishing in Australia and like West Virginia, The Deep South and even the Out Skirts of NYC, they run into 3 Bad fellas that want this couple for more then just house guess. Filled with Suspense. If you like Blood guts and horror and a good film to entertain the crowd on a Cold wet stormy night this is it. 4 1/2 Stars

In comparison to all the crappy horror movies that have been being released, Storm Warning is a huge standout, especially amongst fans in the horror community. It seems nowadays the future of horror is going straight to DVD, whereas years ago it was anything less than a bag of Doritos that collected dust on the shelf. Storm Warning is one of those films on the shelf that shines, and I'm sure it'll please most horror fans. At times it's intense, and it bursts with many moments of strong bloody violence, especially near the end. The atmosphere is sharp and everything is fun and spooky to look at, from the fog seeking through the ground, to the moonlit rain sparkling behind the farmhouse. It's filmed as any other theatrical horror movie would be filmed, and Jamie Blanks, the director of Urban Legend and Valentine, is sure no stranger to the horror genre. He handles this movie well, and I have very few complaints here. The strongest point in Storm Warning are the performances. The acting is top notch for a direct to video horror film. Yes, this did have a short term limited release, but most people didn't hear of it, and it got bigger when immediately released to DVD. And although it didn't blow up as much as it should had, I'm surprised how much little play it's gotten. Every performance was believable, and our three main villains deliver such a creepy display of psychopathic, blood-lusting mayhem. It's solid! Hats off to the actors. And I know we heard this story one million times before. 1 spooky house, a few fresh victims, and a psychotic family that's ready to slice and dice. But what saves Storm Warning from being your typical, unoriginal slasher cheese, is the script. The script is tight, smartly written, and never becomes unbearably corny. It's a true gem, and even with it's flaws, I'm still highly satisfied. If you can get passed the scene where our female lead decides to play Rambo with some razor blades, I'm sure you'll have a good time with this one. It's got quite a few moments of gore, at times it's intense, and there's enough here to chill the bone. Storm Warning, although not perfect, is a fantastic little horror film. I recommend this to die hard fans of the genre, especially to those who believe theatrical horror films have gotten soft immensely, over the years.

"So, after thirty years in the making and twelve months in post-production, was it worth the wait? God, yes. Storm Warning looks incredible, is packed with top-notch performances, and moves along at a furious pace. You'll barely have time to catch your breath." - Dread Central "Jamie Blanks created something truly frightening, and, as a director, displayed immense growth. I suggest you check it out - it's worth it and then some." - Fangoria "STORM WARNING might not be groundbreaking, but it's a still a great thrill ride loaded with scares, laughs and loads of gore." - Bloody-Disgusting "Storm Warning is a remarkable effort and a worthy addition to the horror genre." - Horror Asylum "Gory, mean, and a lot of fun, Storm Warning should appeal to anyone craving an obnoxious serving of red-stained Aussie mayhem." - DVD Verdict "Derivative, obvious, and simplistic, but it's also shot with a lot of style, edited with a lot of kick, and (best of all) it knows just when to deliver its goods and roll the credits." - FEARnet