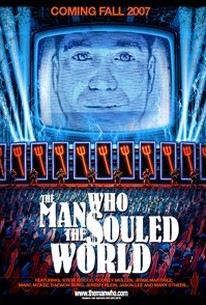 The Man Who Souled the World Photos

Filmmaker Mike Hill profiles one of the skateboarding world's most revolutionary figures in this documentary tracing the life and career of World Industries founder Steve Rocco. Founded in 1989, World Industries made waves throughout the skateboarding industry by ambushing the corporate world to rewrite the rules of the game and usher in a refreshing new era of companies that were owned and operated by skaters. While many thought it could never be done, Rocco accomplished the formidable feat with a little help from such talented friends as Rodney Mullen, Jason Lee, Mark Gonzales, Natas Kaupas, Spike Jonze, and Jeff Tremaine. A cultural revolution that changed the public perception of skateboarding from that of a passing teenage fad to a thriving anti-authoritarian counterculture, the rise of World Industries ultimately resulted in the creation of some of the most unlikely cult heroes in contemporary sports. ~ Jason Buchanan, Rovi

Critic Reviews for The Man Who Souled the World

Just because [director Hill] had access to countless postproduction digital effects doesn't mean he should've used them all.

Audience Reviews for The Man Who Souled the World

There are no featured audience reviews yet. Click the link below to see what others say about The Man Who Souled the World!

The Man Who Souled the World Quotes