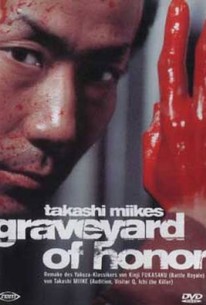 For his fifth or sixth film of 2002 -- one easily loses count -- Takashi Miike adapts Kinji Fukasaku's 1975 gangster classic Jingi no Hakaba about a doomed love affair between a renegade yakuza and his long-suffering girlfriend. Whereas the original film was set in the poverty of Japan's immediate postwar era, this work is set during Japan's yen-flushed bubble era of the 1980s through the economic malaise of the 1990s. The film opens with Rikuo Ishimatsu (Goro Kishitani) coming to the aid of crime lord Sawada (Shingo Yamashiro) with guns a-blazin' in a slick Chinese restaurant. The grateful godfather makes Ishimatsu his under boss, though he quickly establishes himself as a loose cannon with a hair-trigger temper. His first meeting with his future common-in-law wife Chieko (Narimi Arimori) is short and violent: He rapes her in a hostess club. Not only does she not press charges, but she falls for the brute. Later, Ishimatsu is thrown in jail for killing a loan welsher where he becomes friends with Imamura (Ryosuke Miki), a lieutenant in a rival gang. When Ishimatsu finally gets out of stir, both Sawada and Chieko are waiting for him. He quickly rises the ranks of the gang power structure, only for him to blow it over a misunderstanding over a ten-million-yen loan. Ishimatsu's temper gets the better of him, and causes harm to all close to him. ~ Jonathan Crow, Rovi

Critic Reviews for Shin jingi no hakaba (Graveyard of Honor)

There are no critic reviews yet for Shin jingi no hakaba (Graveyard of Honor). Keep checking Rotten Tomatoes for updates!

Audience Reviews for Shin jingi no hakaba (Graveyard of Honor)

As Miike showed with 13 Assassins, this guy really knows how to do a remake. A more brutal look at a sociopathic yakuza destroying his own life and others, this film ranks up there with Miike's best.

Another great lesson of how you do justice to a remake. Goro Kishitani rips several holes in the screen with his incredible performance. One thing is to act like a lunatic, but acting like somebody who doesn't give a fuck about anything? Now that's more tricky.

Nothing cartoonish about the violence in this Miike film, which is a loose remake of Fukasaku's G.O.H. A thug, with an uncontrollable temper, is at the right place at the right time to secure himself a high position in a crime organization. Then falls just as fast. Tends to drag at some points but, if curious about other Miike works, it's worth checking out.

This film barely got 3 stars. I can understand how this film is different from Miike's other yakuza films which all have an "over the top" aspect to it, I understand this film is more realistic in terms of the violence (well excluding the scene where he kills himself cause that's either Miike at his "over the top" best/worst depending on how you look at it) and the storytelling. But for some reason this film doesn't work as well as it should have. Not that it's a bad movie cause for the most part it's good but it sometimes it feels like a chore to watch this film, there comes a point where you are just bored by the film. So I really don't know what it was missing that might have made this movie great. One good thing about the movie is that it feels and looks like an old yakuza film. I haven't seen the original so I really can't compare the two but I'm guessing the original is better. I really cannot recommend this film (other than to Miike fans) cause I really don't think most people will enjoy it.