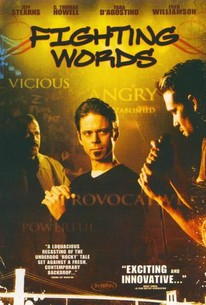 A spitfire coffeehouse poet catches the attention of a conservative publisher, only to find that her attempts to get him to take part in an underground poetry-reading contest mask a much deeper motivation in the feature directorial debut of longtime television writer E. Paul Edwards. To Jake Thompson, poetry is the purest way of expressing his inner rage. Marni Elliot is an attractive publisher who is drawn to Jake's use of words, and convinced that he could take home the top prize at the Los Angeles Poetron -- a competitive poetry contest that has set the underground literary community ablaze. Though Jake at first refuses on the grounds that competition spoils the purity of art, he is intensely drawn to Marni and soon relents after the pair fall into bed together. When Marni reveals to Jake that she is HIV-positive, he quickly breaks the relationship off. As the Poetron draws near and Jake learns that he will be competing against Marni's former lover, however, he comes to realize that he cannot get the publisher out of his mind, and that his sympathy for her condition has helped him to overcome his anger as it transforms him into both a better poet, and a more capable competitor.

Michael Parks
as Benny the Heckler

There are no critic reviews yet for Fighting Words. Keep checking Rotten Tomatoes for updates!

There are no featured reviews for Fighting Words at this time.