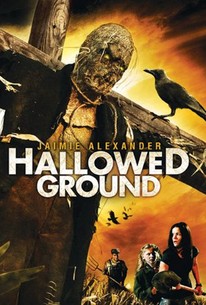 Jaimie Alexander and Brian McNamara co-headline the direct-to-video supernatural horror saga Hallowed Ground. When an innocent young lady becomes unwittingly stranded in an American small town, she senses imminent danger, and in fact soon learns of the town's wretched history: it was founded by a bloodthirsty, Satanically-evil preacher with a nasty little taste for committing human sacrifices. The strange townspeople are both heirs to this legacy and accomplices in it - to such a degree that the newcomer must soon flee in terror from the clutches of the hamlet's residents and the pursuit of a possessed, animate scarecrow who wants her dead.

The film uses the seasonal imagery to its advantage

No surprises here, but the flick is well-directed and manages to keep the pace up with well-punctuated deaths and murders.

The first 30 minutes of the movie were great, then it just got stupid. But it was still pretty entertaining, I guess.