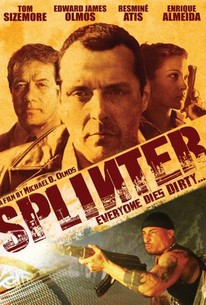 Edward James Olmos turns in a supporting performance in this thriller, the feature debut from his son Michael D. Olmos. Enrique Almeida stars as Dreamer, a young man whose memory was severely inhibited in a gang attack that left his older brother dead. Bent on revenge, Dreamer sets out in search of the killers, but soon finds himself in the middle of a case involving a string of brutal gangland murders. Tom Sizemore also stars.

With its recycled themes and muddled storyline generating a cascade of unanswered questions, the film is more about style than substance.

But the shot du jour (heard and seen daily in every corner of our deadly globe) comes from the bereft mother; her family’s vocational tradition skids to an awful conclusion.

There's some promise in the central idea, but any audience investment it could have generated is done in by the performances either awkward or downright amateurish.

As for Olmos, he has achieved more than most could have with an often cliched screenplay ("Homies are getting killed every day. It's sad." "Those are our f***en homeboys back there. Why don't you show a little respect?").

Cinematographer Bridger Nielson treats every shot as a work of art; you've never seen East L.A. look this gorgeous before. Unfortunately, the actors also seem to have been cast for appearances only.

I like these gang movies cuz it's a fairly interesting world and a lot of good movies of the genre have been made in the past. I wanted to like this also but it came to be a letdown. Below average acting with a disasterous Tom Sizemore doesn't really help a fairly intereresting script. The cinematography was a positive thing with truly great animated opening credits. This one is easily forgotten. Could've been better.