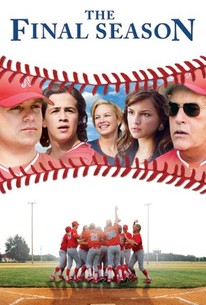 Critics Consensus: The Final Season recycles clichés we've seen in countless other sports movies, making for an unoriginal and uninspiring addition to the genre.

Critics Consensus: The Final Season recycles clichés we've seen in countless other sports movies, making for an unoriginal and uninspiring addition to the genre.

Critic Consensus: The Final Season recycles clichés we've seen in countless other sports movies, making for an unoriginal and uninspiring addition to the genre.

In the small town of Norway, IA, everyone comes together for high school baseball. But, life throws curve balls, and the passionate young players, rookie coach Kent Stock and the hometown fans find that life's greatest challenges strike off the diamond. "The Final Season" is the true story of a coach who inspired his team and brought hope to a town when they needed it most.

News & Interviews for The Final Season

View All The Final Season News

Critic Reviews for The Final Season

An exciting family picture, worthy of viewing, if only for the warm-fuzzy feeling.

Stereotypes are meant to exalt small-town values, but The Final Season is proof that it's hard to paint masterpiece in broad strokes.

Perhaps if Disney had gotten their hands on it, The Final Season would have gotten the spitball polish it needs.

Why is it enjoyable to watch sporting events depicted when we know how the games will end -- how they have to end? Where does the tension come from? Why do we care when we know already?

Belying the claim there's no longer any truth in advertising, The Final Season is exactly the formulaic, by-the-numbers movie it appears to be. These Tigers deserved better.

Remarkably, the movie rights itself once the actual season begins, focusing on game strategy more than the usual heart-stopping pep talks.

The Final Season hits one out of the park!

...manages to overcome the entirely underwhelming nature of its first act.

Most of the townspeople are archetypes. In fact, you get the feeling the town is populated by character actors and not real people.

It never hits a home run. But "Final Season," an adequate movie about an above-average baseball team, isn't a loser, either.

Audience Reviews for The Final Season

A baseball movie, based on a true story, Directed by the same guy who brought the Sandlot to life on the big screen, who could ask for more? Norway, Iowa, one of the smallest towns in the mid-west, with a fabled sports history. Their High School baseball team is one of the most successful high school baseball teams of all-time, and their coach, Jim Van Scoyoc (Powers Boothe), is a legend, who could be coaching in the Major Leagues if he wanted to. Small towns like Norway always have their fair share of problems, mainly money, and with this town near bankruptcy, they've agreed to merge with a larger town, which means only one last season of baseball in Norway, and without the expensive contract of coach Van Scoyoc. The coach eventually convinces his former assistant, Kent Stock (Sean Astin), to take over the team, and attempt to lead them to one last championship, but with the town about to disappear from the map, how will he motivate the players or the town to care? This is one of those stories that is as inspirational as it gets, and it should have been a fantastic movie, but it was not. I have never in my life seen a movie centered around a sport, that moves as slowly as this film does. The Final Season is full of heart to heart chats, court fights about the town, and of course Sean Astin's character. I enjoy Sean Astin, after all he is the star of my all-time favorite movie, but his character is this introvert, who is in way over his head to begin with, not to mention the fact that he's replacing this living legend. Astin or rather Astin portraying Stock was just boring, just once I would have liked to see the guy, explode, show some fire, be a real coach, because it was like watching a math teacher, coach a bunch of kids, that didn't really want to be there for much of the film. The Final Season is a great true story, but as a film, it's more talk than anything else, and fails to even come close to expectations.

Michael Angarano, Sean Astin, Tom Arnold, Powers Booth, Brett Claywell, Nick livingston, Roscoe Myrick, Alexander Roos, James Gammon, Rachel Leigh Cook, Larry Miller DIRECTED BY: David M. Evans Tradition in Norway, IA (pop. 586), can be summed up in one word, Baseball. From father to son, generation to generation, this high school David exists to defeat Goliaths 10 times its size. As Coach Jim Van Scoyoc leads the team to its 19th State title, it seems following it with a 20th is a forgone conclusion. The unexpected strikes when bureaucracy intercedes merging the town with another. Petty jealousies and political designs conspire to rob Norway of its heritage and a 20th Championship. Making matters worse, legendary coach Van Scoyoc is fired and replaced with a one-season assistant coach, Kent Stock--a move that seems to guarantee the team's failure. I guess you can say I am a sucker for these types of films. Use to watch baseball and listen to it on the radio with my dad. Never cared to much for the sport. But yet I can watch a movie about it..:) I am a football kinda gal..lol.. Anyways, I liked this movie a lot. It's a good (and true) story. Love the small town flicks since I'm from one. They are your all American kind of movies.. But this had some good acting, good story, and was all in all a good feel kinda flick. Definitely worth the rent.

Overall, it's a good film. The performances by Sean Astin, Powers Boothe, and Michael Angarano stand out in this film. It kind of reminded me of the Dennis Quaid film The Rookie. The negative, the pacing of this film is off. The film could have been 20 or 30 minutes shorter.

This is the best thing I saw on the plane and it was terrible at best. At least it's good to know that Powers Booth is still alive.