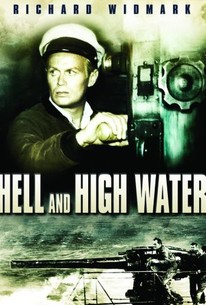 A White House announcement concerning the explosion of a nuclear bomb outside the U.S. provides the framework for this drama that purports to tell the story behind the mysterious blast. The story begins with a group of scientists who are deeply concerned about the government's lack of preparation for nuclear war. To help them find the communist nuclear arsenals hidden in the North Pacific, they hire a submarine captain. The group is appalled to learn of a Russian plot to drop a bomb from an American B-29 on North Korea, knowing full well the U.S. would be blamed. To stop them, the submariners shoot down the plane and explode the bomb.

Robert B. Williams
as Reporter

Neyle Morrow
as Crewman
View All

Hell and High Water more than holds its own with such other all-business '50s naval flicks as The Enemy Below and Run Silent Run Deep.

This is a tepid film by Sam Fuller standards, but still has enough salt in it to burn.