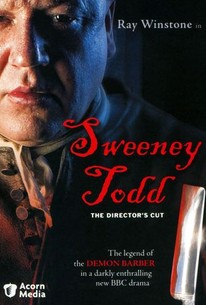 The story of fictional18th Century serial killer Sweeny Todd has frightened theater-goers for over a century, and now the BBC brings this blood-soaked story to the small screen in a ghastly production starring Ray Winstone as the razor-wielding Demon Barber of Fleet Street. In addition to exploring the various heinous acts attributed to the London-based butcher, this production also takes a look back at the events that fueled Sweeny Todd's murderous rampage.

There are no critic reviews yet for Sweeney Todd. Keep checking Rotten Tomatoes for updates!

An interesting version of the Classic tale, which has variations to it's later Musical adaption. Ray Winstone played the role well and gave authentic touch of London to the brutal Barber, a great role also, played by Essie Davis as Mrs. Lovett. The visually dark look of the film created the old Victorian London scene well. This is a really good dramatised version, which varies lots from the bigger, well known movie with Johnny Depp

Exactly how a wonderful story such as Sweeney Todd should be told. Everything about this production is head and shoulders above everything else. First up, we have the setting. This is truly a disgusting London, filled with shit and disease. Next we have Winstone, giving an astonishing performance. It shows how someone like Depp is a performer, but fails to attach himself to the emotional complexity of such a character. Winstone doesn't just decide that people are scum and start offing them. His first kill is a sudden and regrettable impulse. He even checks on the body later in the hopes that he isn't dead. Like so many real-life killers, Winstone's motivations come from a deep rooted psychological trauma. As he continues, the killing becomes the norm. It's his answer to vengeance, suspicion, and his way of attracting a woman. Davis is also brilliant as Lovett. For once this isn't some creepy madwoman, but a fragile and easily manipulated pawn. I can't speak highly enough of this film, or the way it demonstrates how stories from over a hundred years ago, can still be fresh and involving.