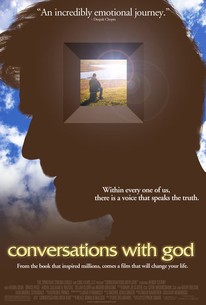 Critics Consensus: At some point in the conversation, God must have asked for a subtler, deeper film.

Critics Consensus: At some point in the conversation, God must have asked for a subtler, deeper film.

Critic Consensus: At some point in the conversation, God must have asked for a subtler, deeper film.

Adapted from the books by Neale Donald Walsch that inspired and changed the lives of millions worldwide, "Conversations With God" tells the true story of Walsch (Henry Czerny) who, at the lowest point in his life, asks God some very hard questions. The answers he gets from God/within become the foundation of an internationally-acclaimed book series that has sold over seven million copies and been translated into 34 languages. The film chronicles the dramatic journey of a down-and-out man who inadvertently becomes a spiritual messenger and bestselling author.

Michael A. Goorjian
as Roy "The Morning Boy"

Critic Reviews for Conversations With God

A coda after the closing credits, encouraging divine dialogues in general, does little to dispel the hagiographic aftertaste.

A terminally muddled movie, uncertain as to whether it's promoting Neale, God, Mammon, Putnam Books or the capitalist exploitation of spiritual need.

Although Stephen Simon's film has the mawkish trappings of an inspirational tale, its unseemly emphasis on monetary matters makes Walsch seem less interested in the spiritual possibilities of his celestial networking skills than their financial benefits.

This film adaptation of Neale Donald Walsch's best-selling book series plays more like an infomercial than a thoughtful exploration of religious issues.

What He does want, according to Walsch, is for us to have jobs we really like, and to make money. Lots of money.

God speaks with Walsch's own voice, the point being, of course, that God is you. God is me. God is a hobo and a douchebag and a blowhard named Neale Donald Walsch.

The film is professionally mounted, smoothly constructed and carried with ease by Czerny's assured performance.

Resembles a vanity project that looks as though every frame was submitted by producer-director Simon to Mr. Walsch for his approval.

The facial hair that actor Henry Czerny is forced to wear in Conversations With God is ludicrous, even laughable -- as is much of this film.

The cinematography has all the flair and depth of your average episode of "Yes, Dear"; the score is a giggle-inducing juggernaut of obviousness; Eric DelaBarre's script contains virtually no believable dialogue; and Stephen Simons' direction carries the s

...boils down to the assertion that God is that voice in your head, a fairly innocent concept until God starts telling you to do something wrong.

Audience Reviews for Conversations With God

This American tale of burgeoning spiritual discovery is meant to be wonderful ... but instead is awkward, stilted and poorly executed (particularly when lingering on the wonderful that's not), thus insuring that I will treat the literature, should I ever run across it, with the same disrespect that this film treated me.