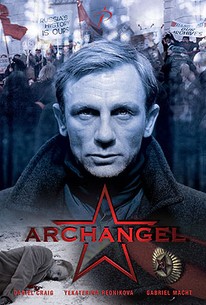 After nearly a half-a-century of silence, the final secret of Josef Stalin reveals itself to a former Oxford historian who is currently attending a Russian conference for the newly opened Soviet archives in a tense international thriller starring Daniel Craig (Casino Royale). Fluke Kelso (Craig) is on his way out of Russia when an unexpected visit from an ex-officer of the Soviet Secret Police offers hints of a deadly scandal. Later, when the mysterious former agent is found brutally slain, Kelso enlists the aid of the man's daughter Zinaida in finding the answer to a mystery that was presumably buried along with the Soviet Union dictator back in 1953. When Fluke and Zinaida travel to the remote Russian seaport of Archangel in search of the elusive truth, the vengeance of both the Russian authorities and the dangerous underworld threatens to silence them both and keep Stalin's secret buried for yet another half-a-century. ~ Jason Buchanan, Rovi

A positively gripping work which never lets up the tension and the intrigue, with great performances and touches of wry humour. And a sensational subject.

This was a very well done mini-series from the BBC. The plot twists and turns made it an intriguing watch. The scenery, and locations, added to the mystique. The acting was first rate. A very interesting, and nicely done, mystery/espionage/thriller.

I loved the story behind this fantastic movie. I am interested in this sort of thing which is why I enjoyed it so much. Amazing performances by all the cast and I loved the mise en scene so much. It was really really effective. Fantastic.

Another brilliant piece of acting from Daniel Craig. I hate the way people assume he's always how he is in Bond, this character could not be further. Shows some terrifying truths about the state of modern resurgent Russia. Brilliant acting all around, a decent plot, even believable, beautiful locations....has it all.

Pretty much I'll watch or read anything to do with Russia and Stalinism, and if you add Daniel Craig to it, I'll eat it up. It was alright, but I did get bored several times and wanted to go make some taquitos.