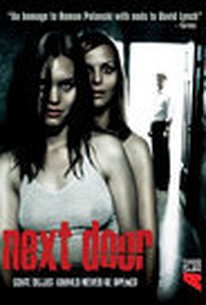 A lonely apartment-dweller who was recently abandoned by his longtime girlfriend finds his sanity slipping as his friendship with the two mysterious women next door takes a seductively sinister turn in director Pål Sletaune's dark tale of obsession and paranoia. When John's girlfriend walks out on him, he soon begins to form a neighborly friendship with the two women who live in the cluttered apartment next door. That friendship soon takes an ominous turn, however, when one of the women seduces John with a punishing blow to the jaw that sends a series of disturbing repressed memories flooding back into the confused man's swimming head. As John begins to fall into his feral seducer's sadistic trap, gradually finds himself questioning the strange reality that seems to have swallowed him body and soul. ~ Jason Buchanan, Rovi

Critic Reviews for Naboer (Next Door)

Sletaune succeeds in suggesting a correlation between the twisty corridors and creepy rooms and the characters' fragile psyche.

Audience Reviews for Naboer (Next Door)

A decent psychological thriller that one can afford to miss. Watch it or miss it; won't make a world of difference.

Sordid, twisted, grim and confrontational. I'm surprised there isn't more controversy around this film. The sex/beating scene is superbly executed. It perfectly captures the raw passion and primitive aggression of the moment. The performances are all eerie and add to the "What the hell is going on?" atmosphere. Keeping it contained and short allows it to get to the point. It's a very forceful film but one that avoids needless graphic scenes. Only downer is the ending is easy to spot from some way off.