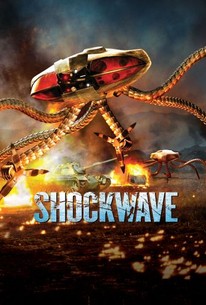 The wildly prolific cult exploitation director and Roger Corman vet Jim Wynorski (Big Bad Mama 2, Not of This Earth) returns to the thematic territory of his 1986 Chopping Mall with the direct-to-video sci-fi actioner Shockwave (2005). The premise concerns a series of top-grade, covert "Shock Wave" robots. Originally designed as Mars Rovers, these machines - shielded with thick armor and laden with state-of-the-art lasers, weapons and tracking systems - ultimately proved themselves so ubiquitous that the armed forces opted to use them in routine military operations, to root out terrorists when attempting to suppress hostile lands. As the story opens, however, a plane transporting the machines crash lands on an abandoned Pacific island. The robots then go on a rampage, and a group of hotshot Navy SEALS is assigned to bring them down, via cutting edge particle cannons. The men are hindered by one small detail: as time rolls on, the intelligence of the robots builds rapidly, enabling the machines to dismantle all of the guns. As the power of the aggressors builds, the soldiers must find an innovative way to stop the madness, before the robots gain enough force and power to wipe out the entire human race.

There are no critic reviews yet for Shockwave. Keep checking Rotten Tomatoes for updates!

There are no featured audience reviews yet. Click the link below to see what others say about Shockwave!