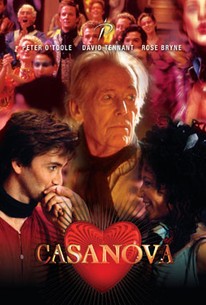 As the world's greatest lover lies slowly fading on his death bed, the memories of his passionate past come flooding back in director Sheree Folkson's tale of lust and adventure in 18th Century Europe. Casanova (portrayed in his early years by David Tennant, and his dying days by Peter O'Toole) was a slave to the pleasures of the flesh. In his heyday the tireless lover would lie with some of the world's greatest beauties, yet without the live of the married Henriette (Laura Fraser) happiness always eluded him. After a chance encounter in his final days spurns on memories of his one true love, a dying Casanova makes one desperate attempt to see Henriette before death comes to claim him. ~ Jason Buchanan, Rovi

This stylish romp suggests that the secret to Jack's success is that he actually listened to what women said.

David Tennant is delightful as Casanova.