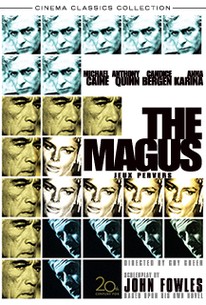 In Guy Green's adaptation of John Fowles's acclaimed second novel, Michael Caine plays Nicholas Urfe, an English schoolteacher evading serious romantic commitment with stewardess Anne (Godard muse Anna Karina). As a last resort, Urfe escapes the clutches of his paramour by accepting a professorship on the Greek island of Phraxos, and, upon arrival, promptly discovers that his predecessor committed suicide. Via a clue left behind in the room of the deceased, Urfe soon encounters Conchis (Anthony Quinn), an impresario/psychic/black magician/filmmaker who may have been responsible for the former professor's death, and who twists Urfe's mind and perceptions, while subtly leading the young man down the path to higher consciousness. Urfe also discovers the radiant Lily (Candice Bergen), a Diana-like figure (and possibly a literal goddess incarnation), with whom he becomes instantly smitten - and who just happens to be Conchis's lover. ~ Nathan Southern, Rovi

Critic Reviews for The Magus

It is surprising how the movie (which was shot, incidentally, in Majorca without the Greek crisis in mind) is not embarrassing, but actually dovetails with yachtings and oppressions in contemporary Greece.

By...clinging to the original book it suffers from the same pitfalls, mainly the preposterous plot twists and suffocating sense of self-seriousness.

The Magus not only suffers from [director Guy] Green's lack of intuition and precision (that is, everything that separates a didacticist from an artist), but also from Fowles' directly transcribed literary illusions.

Audience Reviews for The Magus

This movie is pretty interesting and mysterious until you get to the horrible ending. I liked Caine in the movie, but that's about it. This movie is so-so.