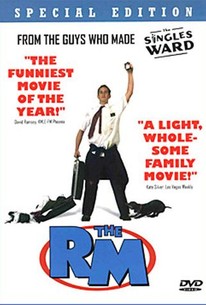 A returned missionary, or "R.M." for short, finds that his life back home didn't wait for him in this religious comedy. Kirby Heyborne plays Jared, a member of the Church of Jesus Christ of Latter-Day Saints who's just finished his term at a mission in Wyoming. He's eager to propose marriage to his doting girlfriend Molly (Erin M. Robert), return to his old job, and see his eccentric family again. But his corner of Utah is a different place now: His parents have forgotten to pick him up at the airport, his room has been rented out to an exchange student, and his girlfriend is engaged to someone else. Worse yet, he's being pulled in every direction by his unsympathetic new boss and hedonistic heathen of a best friend (Will Swenson). But when he meets fetching young Kelly (Britani Bateman), Jared's life begins to look up. The R.M. was written and directed by Kurt Hale of Halestorm Entertainment, a company created to independently produce and distribute feature-length entertainment for LDS audiences.

Critic Reviews for The R.M.

A lame production that suffers from a paucity of fresh ideas.

Amateurish performances and production values, pointless local cameos and a parochially exclusionary tone that penetrates all the way to the movie's title.

Witty and highly polished, if very forgettable, satire that pokes self-deprecating fun at the church while strongly reaffirming its values.

Non-Mormons may find themselves scratching their heads at the LDS in-jokes, but much of the film is surprisingly funny.

...the film is a witty and enjoyable romp...

Even with its shortcomings, it's hard not to like as family entertainment and though the genre is still in its incipient stages, 'R.M.' can claim the title of funniest LDS-based movie to date.

It is not a great film, but it's a good one, a pleasant one.

The film is most successful when it's trying to replicate the Airplane! strategy: throwing as many jokes as possible at the wall to see what sticks. However, it's simply a case of trying to do too much.

...A funny romp in Happy Valley; until it starts to take itself too seriously.

Audience Reviews for The R.M.

There are no featured audience reviews yet. Click the link below to see what others say about The R.M.!