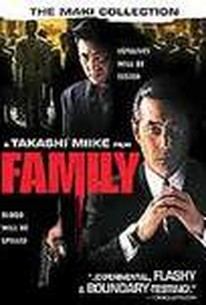 Acclaimed director Takashi Miike explores a different kind of family dynamic with this adaptation of Hisao Maki's popular manga following the story of two rival yazuka clans engaged in a bloody battle for underworld supremacy. Notorious hit man Lightning Takeshi has been recruited to take out a powerful mobster, though his contract is compromised when an unidentified woman identifies him before the job is completed. Now forced into hiding along with his family, Takeshi must avoid the wrath of the vengeful rival clan while attempting to come to terms with his growing feelings for the frightened female witness. As the bullets begin to fly, inverterate grudges begin simmering to a boil, and longtime loyalties are put to the ultimate test. ~ Jason Buchanan, Rovi

There are no critic reviews yet for Family. Keep checking Rotten Tomatoes for updates!

Not Miike best but enjoyable none the less, It just lacks Miike's usual crazy originality. pretty violent and pervers and it's always nice to see Kenichi Endo even if all he seems to do is get his schlong out.