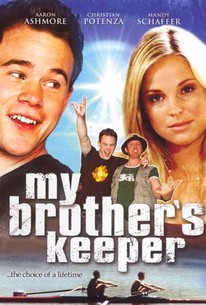 When two twins who share little in common except for their looks get one shot at living the dream they've always wanted, they are forced to sacrifice much more than just their individuality in a brotherly comedy drama about what it means to just be yourself. Eric Woods (Aaron Ashmore) is a straight "A" student who longs for nothing more than a high paying job to get him out of his dead-end industrial hometown. When Eric's slacker brother Lou (also Ashmore) receives a rowing scholarship to a prestigious, Ivy League university, he secretly switches identities with his brainy brother in order to maintain his G.P.A. and not lose his athletic edge. The National Rowing Finals are coming up fast though, and as Eric begins to weigh his loyalty to Lou against the comfort of his new lifestyle at Oakridge, anger and deception threaten to sink the goals of both brothers before the paddle even hits the water.

Critic Reviews for My Brother's Keeper

There are no critic reviews yet for My Brother's Keeper. Keep checking Rotten Tomatoes for updates!

There are no featured reviews for My Brother's Keeper at this time.