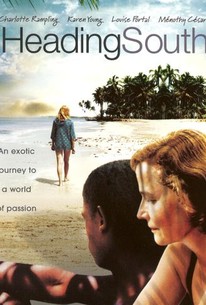 Critics Consensus: As touching as it is disturbing, Heading South is an unconventional exploration of desire and longing, with superb performances and direction.

Critics Consensus: As touching as it is disturbing, Heading South is an unconventional exploration of desire and longing, with superb performances and direction.

Critic Consensus: As touching as it is disturbing, Heading South is an unconventional exploration of desire and longing, with superb performances and direction.

A trio of lonely, middle-aged American women finds their growing disillusionment with stateside men leading them to seek emotional comfort and sexual gratification in the arms of young Haitian man in Time Out director Laurent Cantet's emotionally incisive adaptation of Haitian-Canadian author Dany Laferrière's acclaimed short stories. Competing for the attentions of beautiful young Haitian native Legba (Ménothy Cesar) are 55-year-old Wellesley professor Ellen (Charlotte Rampling), sexually frustrated Canadian factory worker Sue (Louise Portal), and fortysomething Georgia blonde Brenda (Karen Young). The Hotel Petite Anse is a haven for older women seeking the companionship of younger men, and doyenne Ellen has come to establish herself as something of the queen bee of the popular island establishment. Despite the constant threat of Baby Doc Duvalier's thuggish henchmen, these lonely women risk their livelihoods to bask under the sun and forget the troubles of their daily lives as the line between exploiter and exploited becomes increasingly blurred. ~ Jason Buchanan, Rovi

Vanessa Michel
as Girl In Yellow

Vanessa Michele
as Girl in Yellow
View All

Exploring female desire in a way films rarely do, Heading South is a film of sometimes subtle, sometimes blunt metaphors for the interaction of rich and pauperized countries.

The film offers something unusual, a tragic spectacle of normal, recognizable and utterly sympathetic people condemning themselves.

An unsettling drama by the director of two other remarkable films about class illusions, Human Resources and Time Out.

The movie avoids devolving into polemic by treating its characters as individuals.

In its way, the film is a piercing indictment, though it makes its point without much screaming, hectoring or preening. It's quietly terrific.

At 60, with three 2006 releases in the can, Rampling still seems an international treasure, a great camera subject and a truly daring actress.

The denunciation material presented by this Cantet film makes me reflect when it elaborates a very contained and transparent panorama on misery, social inequality and sex tourism. [Full review in Spanish]

Displays an almost Fassbinder-like sensitivity to emotional shifts in power

What Heading South says through careful omission or brief allusion is often more interesting than what it says on the clunky surface.

It also boasts another rich performance by Charlotte Rampling who continues to grow more interesting as an actress.

[font=Century Gothic]"Heading South" takes place in Haiti in the late 1970's where Brenda(Karen Young), a 48 year-old woman, returns after a visit three years previously where she enjoyed a tryst with a Haitian boy, Legba(Mentothy Cesar), and enjoyed her first orgasm. She stays at the same hotel and meets him again but is unpleasantly surprised to find Ellen(Charlotte Rampling), a 55 year-old professor, holding court. Ellen has spent the previous six summers at the same hotel to pay for sex with the young Haitian men who hang out at the beach. And she is not the only one...[/font] [font=Century Gothic]"Heading South" is an ambiguous and matter-of-fact movie about the controversial subject of sex tourism. Had the American characters been men, then they would have been much less sympathetic. Here they are middle-aged women in the midst of the sexual revolution just before AIDS decimates Haiti. They are exploring their sexuality in a way that would have been impossible back home. They are balanced with the young Haitian men who engage with the women in an attempt to escape their desperate lives of poverty and repression under the brutal Duvalier regime.[/font]