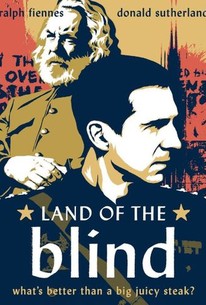 Land of the Blind Photos

The debut film by director Robert Edwards, Land of the Blind, is a political satire starring Ralph Fiennes as a military man who helps overthrow his government. He does so at the urging of a political prisoner, played by Donald Sutherland, who has been outspoken about the corruption of the current regime. The soldier learns that corruption may in fact be an inevitable part of having power. Set in an unnamed country without ever giving indication of a specific time period, the allegorical film had its North American debut at the 2006 Tribeca Film Festival.

John Sharian
as Guy on Next Stool

Jodhi May
as Joe's Mother

Philippe Smolikowski
as Judge
View All

Critic Reviews for Land of the Blind

The only matter that interests is the question of Fiennes's presence in this political lesson for children.

About as subtle as its all too obvious title would suggest.

An indelible portrait of the contradictions of power.

Robert Edward's satirical allegory shamelessly borrows ideas from Orwell's 1984, then tramples them into the dust.

If satire is the thing that closes on Saturday night, then political satire is usually doomed to close one night earlier. In the case of a pretentious monstrosity called Land of the Blind, it's a miracle it ever opened at all.

one of the most politically essential films of the year, almost as significant as Terry Gilliam's masterpiece Brazil.

A sour satirical cocktail blended with ingredients oft-used in the recipes of Terry Gilliam and Paul Verhoeven.

The Who did it better in We Won't Get Fooled Again

Is this what we have stooped to for leftist political films? Robert Edwards' film for one reason or another really thinks it's saying something.

A labored pastiche of familiar dystopian motifs that beats the same, totalitarian-themed drum over and over again.

Audience Reviews for Land of the Blind

Land of the Blind I picked up this film not knowing anything about it. Found it in a pawn shop for $3.00 it was worth that. I like most of the movies that Donald Sutherland stars in, but this one was a little different and nothing he did stood out. Its about a political Prisoner who spent years being beaten, starved, and trying to control his mind, A guard played by Ralph Fiennes helps him escape. After escaping Sutherland overthrown the government of one Maximilian II by killing him and his beautiful wife ( Think I would have kept her around, sure she would have seen things my way with a little persuasion). After being in charge awhile the people are no better off under Sutherlands Leadership as they were under Maximilian's matter fact things are worst (Sound Familiar kind of like Iraq). Fiennes is now the one in prison (retraining camp) at the end of the movie, telling the story. Movie didn't do much for me, but I am sure there will be some who swear by it. 3 Stars from My Mind.

[font=Century Gothic]"Land of the Blind" takes place in an unnamed country where Maximillian II(Tom Hollander) is President for Life, having succeeded his father who ruled with an iron fist. The son is a bit of a dimwit, albeit a dangerous, sadistic film-obsessed one who takes after his father in the jailing, torturing and killing of dissidents department. One such dissident is former playwright, John Thorne(Donald Sutherland), who is leading a prison protest by not wearing prison uniforms and decorating his jail cell in a lovely shade of feces.(And also writing relevant quotations on the walls in the same material, too.) A young prison guard, Joe(Ralph Fiennes), takes a liking to the prisoner and strikes up the odd conversation...[/font] [font=Century Gothic]"Land of the Blind" is an intelligent, witty, cheaply made movie about propaganda and the need to think for oneself. It also serves as a commentary on government. The movie is unabashedly pro-democracy and in not just giving lip service to the idea, either. A government is at its most dangerous when only one person is in charge. When that happens, their ideas can become reality, no matter how idiotic or dangerous they may seem. With a democracy, many different opinions are given and heard, thus hopefully giving the people a better voice in their own government.(As an anarchist, I am not fond of the idea of government in any form.) [/font]

Land of the Blind Quotes