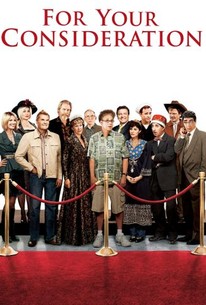 Critics Consensus: As the object of satire gets bigger the jokes become thinner, and Christopher Guest isn't as droll or insightful here than when he was lampooning smaller subjects.

Critics Consensus: As the object of satire gets bigger the jokes become thinner, and Christopher Guest isn't as droll or insightful here than when he was lampooning smaller subjects.

Critic Consensus: As the object of satire gets bigger the jokes become thinner, and Christopher Guest isn't as droll or insightful here than when he was lampooning smaller subjects.

For Your Consideration Photos

Debut feature director Jay Berman steers cast and crew through a typically tumultuous independent film "Home for Purim," an intimate period drama about a Jewish family's turbulent reunion on the occasion of the dying matriarch's favorite holiday. When Internet-generated rumors begin circulating that three of the film's stars--faded luminary Marilyn Hack, journeyman actor and former hot dog pitchman Victor Allan Miller, and ingénue Callie Webb--may be perpetrating Award-worthy performances, a rumble of excitement rattles the cast. Once "Hollywood Now" anchors Chuck Porter and Cindy Martin pick up the buzz, Award fever infects the entire production. Unit publicist Corey Taft, talent agent Morley Orfkin, and producer Whitney Taylor Brown all smell the sudden potential for a sleeper hit. As does Sunfish Classics President Martin Gibb, who suggests some last-minute changes that he feels will broaden the film's appeal. Meanwhile, "Purim's" screenwriters, Lane Iverson and Philip Koontz, grow steadily more horrified as they watch the first film adaptation of their work diverge from their original story. As the hopeful "Purim" team careens toward the end of production and the upcoming Award season, tenuous relationships and brittle dreams play out in unexpected ways.

Sandra Oh
as Marketing Person No. 1

Richard Kind
as Marketing Person No. 2

Hart Bochner
as Himself

Mark Harelik
as Round Table Host

Claire Forlani
as Herself

Derek Waters
as Even Younger Actor
View All

News & Interviews for For Your Consideration

View All For Your Consideration News

Critic Reviews for For Your Consideration

The point is that Hollywood types are--gasp!--shallow. If that news shocks anyone, check your pulse, because you may have been in a coma for 80 years.

May be a small jewel but it is certainly better value than half the biggies around just now.

The best jokes are the true jokes, and truth has not been best served here.

Guest goes for big, crude laughs every step of the way, and only a few of them come off.

The comedy is very unsubtle, and huge swathes of screen-time are given over to Fred Willard as a presenter on a dumb entertainment TV show - funny, yes, but not funny enough to justify the vast amount of time he is given.

In the most bittersweet of ironies, O'Hara was tipped by some as a potential Oscar nominee for her performance in the film. You suspect that she handled the whole demeaning circus with rather more dignity than her character does.

Look, while For Your Consideration may not be Guest's best film, as Guest not at his best is better than most, you'd be a fool to miss this.

This isn't a movie meant to inspire much reflection. It aims to entertain and that it does.

For Your Consideration is not Guest at his best, but it's still an enjoyable way to spend a few hours and the company you'll keep is memorable enough.

Aside from an occasional chuckle, For Your Consideration is banal and, worst of all, frequently annoying.

Audience Reviews for For Your Consideration

Even with a running time of around 80 minutes, this largely improvised comedy feels like a whole eternity: not just utterly unfunny and all over the place with a plot that has no idea what it is doing, but also insufferably annoying with ridiculous jokes that are only embarrassing.

After I was five minutes into this, I remembered I saw it a couple of years ago. Anyway, it held up. In fact, I liked it better this time around.

Jay Berman: I love that you did all this work, and it'll serve you well - but not on this movie.  For Your Consideration is at times a mildly amusing mocumentary, but for the most part it's jokes fall flat. This is widely considered Guest's worst mocumentary and I'd have to say I agree. I don't know what went wrong here, but you'd think this could have been one of Guest's best.  The story revolves around the shooting of and talent involved in a movie called Home for Purim(later to be called Home for Thanksgiving). The movie deals with Oscar hype and how it affects some of the movies stars. It's easy to tell when the movie wants to be funny; but most of the time it's just not. It still has it's moments of laugh-out-loud humor; it's just not what I expected from a Guest film. The usual cast is involved here again. All of Guest's standards are here; Parker Posey, Fred Willard and Eugene Levy just to name a few.  This is a really disappointing movie because we've already seen what Guest could do with the likes of This is Spinal Tap and Waiting for Guffman. For Your Consideration really deserves no consideration as a good mocumentary.

Another amusing Christopher Guest mockumentary, this time set in Hollywood and targeting the hoopla and absurdity surrounding the Oscar's and promise of a nomination. It took me a little while to warm up to this one, but eventually I got into it and it had some pretty funny moments. It is really quite clever in places, and it's probably not that much of a stretch that a small movie and those involved could be swept up in the rumors of possible Academy Awards in such an extreme manner. The usual Guest regulars are all here, and so is his particular sense of humor that you either get, or you don't. It's a safe bet that you'll probably like For Your Consideration about as much as you liked other Guest movies like Best in Show. Manage your expectations accordingly.

For Your Consideration Quotes