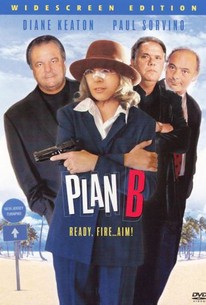 When a gentle bookkeeper is forced to act as an assassin in order to pay off her husband's debt to the mob, the bloodless scheme she concocts to keep a clear conscience could cost her more than she bargained for in a blistering crime comedy starring Diane Keaton, Burt Young, Bob Balaban, Paul Sorvino, and Natasha Lyonne. Fran (Keaton) has just lost her husband, and if that wasn't enough to shake her world, the revelation that he owed a healthy chunk of change to a local syndicate head does little to comfort her in her time of mourning. Soon informed that she is to carry out a series of risky assassinations lest she find herself having a premature reunion with her recently departed spouse, Fran opts instead to drive her would-be victims to her brother's house in Florida for safe keeping. When the big boss receives word that his enemies may not be as dead as he was led to believe, his impromptu trip to the Sunshine State leads to a comic series of criminal complications.

Michael Allinson
as Charles the Butler

Critic Reviews for Plan B

There are no critic reviews yet for Plan B. Keep checking Rotten Tomatoes for updates!

Audience Reviews for Plan B

This really is not a good picture...