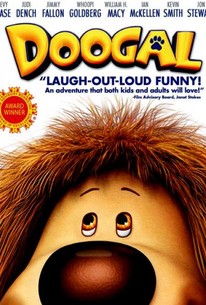 Critics Consensus: Overloaded with pop culture references, but lacking in compelling characters and plot, Doogal is too simpleminded even for the kiddies.

Critics Consensus: Overloaded with pop culture references, but lacking in compelling characters and plot, Doogal is too simpleminded even for the kiddies.

Critic Consensus: Overloaded with pop culture references, but lacking in compelling characters and plot, Doogal is too simpleminded even for the kiddies.

Legend tells of three magic diamonds that, if in the wrong hands, can be united to create a force powerful enough to freeze the sun. When the evil sorcerer Zeebad (Jon Stewart) escapes from his ancient prison, he vows to exact revenge by deep-freezing the earth forever. Determined to save the world, a fellowship of four unlikely heroes band together to foil Zeebad's villainous plot. Led by the candy-loving mutt Doogal (Daniel Tay), friends Dylan (Jimmy Fallon), Brian (William H. Macy) and Ermintrude (Whoopi Goldberg) all embark on an epic adventure to save the world. In order to find the diamonds before Zeebad, they must climb icy mountains, navigate fiery pits of molten lava, sail across vast oceans and pass through a booby-trapped temple guarded by an army of ninja skeleton warriors. Along the way they learn that the most powerful weapon is their friendship -- which even Zeebad's evil magic cannot destroy.

The slapdash dialogue and smug vocal talent detract from the visual appeal of the most energetic sequences (like a raucous train chase) and what's left of Danot's designs.

The laziest, most disheartening kind of animated children's film.

Where is it written that 4-year-olds don't deserve a good story, decent characters, and a modicum of coherence?

Hungering for more references to the 'Wassup' commercials, Dr. Phil, 'Bling Bling,' The Lord Of The Rings, MC Hammer, or The Matrix? Don't worry, Doogal contains nods to all of these.

It's a movie that scrounges so desperately for laughs, it features both a flatulent moose and a flatulent train.

It's easily the worst kid's movie since Spy Kids 3-D, a confusing blur of a magical quest based on an ancient British stop-motion animation TV show.

Young audiences should be spared its obnoxious droning presence.

Too often those behind the slick 3-D animation spectacles aimed at children imbue them with too much adult humor.

A delight for very young children and any parent who'll get the Attorney General joke of "Geneva Convention? I don't care if it's a Star Trek convention!"

A jumble of bad movie cliches strung together into an overly simplistic tale of a pooch who gets in trouble over candy.

For U.S. audiences the voices have been dubbed by the likes of Whoopi Goldberg, Jon Stewart, Chevy Chase and Jimmy Fallon, who add nothing; in fact, the movie drags them down with it.

I can only assume that half the movie got lost in translation, and that's how we ended up with the bald mess we have today.

I hated this movie, the animation was bad, the comedy was horrible, and I think kids will know better than to watch this crap.

I hated this movie, the animation was bad, the comedy was horrible, and I think kids will know better than to watch this crap.

So many animated movies these days. This is one of the lousier of such movies. I didn't think much of the animation, nor the story.

Why do Americans have to re voice and re name movies? Dumbasses