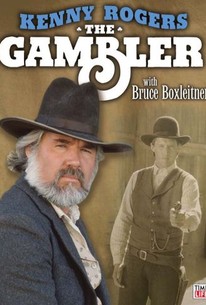 When first telecast on April 8, 1980, this made-for-TV movie was titled Kenny Rogers as The Gambler. Jim Byrnes' teleplay is loosely inspired by Rogers' Grammy award-winning song. Rogers plays high-rolling gambler Brady Hawkes, who is en route from El Paso to Yuma to see the son he never knew. Along the way, Hawkes befriends Billy Montana (Bruce Boxleitner), feckless Eastern tinhorn. The twosome comes to the aid of reformed "lady of the evening" Jennie Reed (Lee Purcell), who is pursued by an unprincipled train baron. At the end, Brynes must stand up to his son's cruel stepfather (Clu Gulager). A huge ratings success, The Gambler inspired four sequels over the next two decades.

Marianne Gordon
as Dallas
View All

Critic Reviews for The Gambler

There are no critic reviews yet for The Gambler. Keep checking Rotten Tomatoes for updates!

Audience Reviews for The Gambler

A song turned into a movie. Kenny Rogers' best western effort. It's got that made-for-TV small-scale charm about it. Plenty of action and interesting characters.