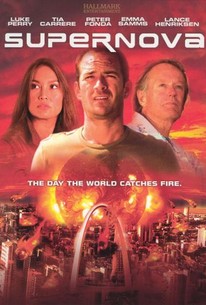 In the tradition of The Day After Tomorrow, Deep Impact, and Armageddon, Peter Fonda, Tia Carrere, Luke Perry, and Emma Samms star in Supernova, a three-and-a-half hour miniseries originally created and produced for The Hallmark Channel. In this special effects-laden sci-fi actioner, Fonda plays a Dr. Shepard, a famed astrophysicist who discovers -- all too late -- that the sun's age has been miscalculated, and that it will supernova in a matter of only days -- destroying the Earth and everything else in our solar system. As Dr. Shepard flees to Africa, his prophecy materializes: enormous solar particles careen toward the Earth, destroying its international landmarks. Meanwhile, a group of scientists begin to search for the missing Shepard and a paranoid government agent (played by Lance Henriksen) schemes to help a small group of civilians escape the coming disaster by furnishing underground bunkers to shield and protect them.

There are no critic reviews yet for Supernova. Keep checking Rotten Tomatoes for updates!

There are no featured audience reviews yet. Click the link below to see what others say about Supernova!