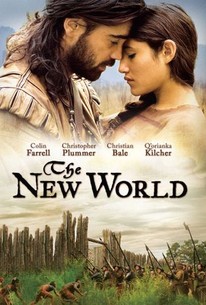 Critics Consensus: Despite arresting visuals and strong lead performances, The New World suffers from an unfocused narrative that will challenge viewers' attention spans over its 2 1/2 hours.

Critics Consensus: Despite arresting visuals and strong lead performances, The New World suffers from an unfocused narrative that will challenge viewers' attention spans over its 2 1/2 hours.

Critic Consensus: Despite arresting visuals and strong lead performances, The New World suffers from an unfocused narrative that will challenge viewers' attention spans over its 2 1/2 hours.

This epic adventure is set amid the encounter of European and Native American cultures during the founding of the Jamestown Settlement in 1607. Inspired by the legend of John Smith and Pocahontas, this story is a sweeping exploration of love, loss and discovery -- both a celebration and an elegy of the America that was... and the America that was yet to come. Against a historically accurate Virginia backdrop, two strong-willed characters -- a passionate and noble young native woman and an ambitious soldier of fortune - are torn between the undeniable requirements of their civic duty and the inescapable demands of the human heart.

Jonathan Pryce
as King James I

News & Interviews for The New World

View All The New World News

Critic Reviews for The New World

These whispered ruminations are beautifully written, but whose voice are we hearing?

The New World is a film to which you have to surrender to enjoy.

A profound, revealing, wonderful film about the meeting of two cultures and the shaping of a new one.

The New World isn't Terrence Malick's best, but it's guiding him in the right direction.

The New World laps over its audience like water on a deserted beach, moving so quietly that you almost don't notice that it's enveloped you.

The New World is stately almost to the point of being static and thus has trouble finding a central story around which to arrange itself; it's not quite the thin dead line, but it's close.

Rumored to be on a scale as grand as Titanic, I must say Malick succeeded -- if he was going for the events of the ship and not the success of James Cameron's film.

A probing, lyrical exploration of what makes us - as humans, as Americans, as inhabitants of this mortal plane - who we are.

The true star of this film is the incredible cinematography by Emmanuel Lubezki.

Closer to a symphonic poem than any conventional form of dramaturgical motion picture, Terence Malick's The New World is a triumphant work of unmitigated sensuality.

Any ambience created in tandem by Lubezki and Malick repeatedly dissipates in the face of the plodding treatment of fascinating material.

The filmmakers are very wise to make this New World, and the people in it, seem untouched, immediate, and present. There may be a small amount of cultural foreboding, but it is heard distantly, like an echo of lamentation.

Audience Reviews for The New World

A beautiful poem to Western civilization's arrival on American shores told through the by now familiar romance of John Smith and Pocahontas. Malick's work is not for everyone as he ignores conventional storytelling. The leads are powerfully convincing in this, the visuals lush and the music epic. Meant for a quiet space in your life where there's time to let it all in.

I enjoyed this movie, but I suspect I'll probably enjoy it with a second or third viewing. Also, maybe if I plan to watch it (instead of turning it on because it happens to be on unexpectedly), and watch it when I'm not tired and can focus, then I'll enjoy it more. Terence Malick is a very acquired taste, but is capable of providing some rewarding stuff. One has to be in the right mood to enjoy his stuff, but if you can get into that groove, then the experience is quite something. This take on the Pocahontas story, while taking liberties and guilty of some inaccuracies, does far better justice than the 90s raping perpetrated by Disney. For one, this is just better shot, not (really as, if at all) whitewashed, and just a better production all around. Oddly enough, Christian Bale is involved with both films. Despite some license with history/story, and a purposeful desire to focus on the romance, this is a thoughtful, gorgeous poem about culture, nature, and life. As is common with Malick's work, the cinematography and visuals are absolutely stunning. This sucker is just wonderful to stare at. What misgivings the story has are made up with more faithful attempts to accurately depict cultures, sets, locations, and costumes. The art direction and set design, like the camera work, are dynamite. The real star of the show is nature. The humans do a good job too, but they are merely supporting players, even the characters who are supposed to be the leads. This is art, so I'm sure most people won't like this. It wouldn't be what they're expecting. Much like 2001, Solaris, and other great works of art, this film is long, slow paced, and features minimal dialogue. I appreciate the subtlety and not having everything handed to me. What's odd though is that while there's not much dialogue, there's a lot of voice overs to fill in the gaps. Some don't like this (as I've read), but it didn't bug me too much. One thing I really appreciated is how not all of the scenes with Native Americans speaking are subtitled. I liked that. It makes the viewer pay attention and pulls them into feeling just like the colonists in terms of having to jump a communication hurdle. I wanted to like this more, but I found it hard to watch. For the reasons I opened this review with, it's not so much to the fault of the film. I think you should give this a chance, if only to stare and gorgeous images and listen to beautiful music while cultures clash in an artistically rendered historical romance.

A gorgeous, heavily emotional film from the brilliant Terrence Malick concerning the dawn of the exploration of America, and how John Smith (Colin Farrell) becomes deeply connected with the princes Pocahontas (Q'Orianka Kilcher) after she saves him from certain death by her people. Unfortunately, this is a very misunderstood movie. It isn't aiming for historical accuracy or to tell a usual epic story, instead it is a long, winding poem full of whispers, beautiful scenery, and fantastic music. It is not for everyone given its length (the director's cut runs nearly three hours) and unique style, but the hypnotizing grasp this film had on me lasted for near its entirety. Sure, as said, it takes some liberties with how to portray historical characters (there's no way Smith would be as quiet and reflective in real life as he is here), but this is a truly beautiful movie and moving story to be a part of. It's a mixture of history and romance, but most importantly, it's an experience. This is a work of beautiful art, which is undeniably the goal of Malick. The gorgeous, mature Kilcher is a revelation as Pocahontas, and Farrell is extremely impressive as a romanticized Smith. You either love Malick (like me), or you hate him. To me, this might be his finest work, which is saying something.

Terrence Malick has a knack of filming the human experience as if it were a nature documentary, and a very long one at that! Still the story of Pocahontas is an enticing one and the actors are captivating.