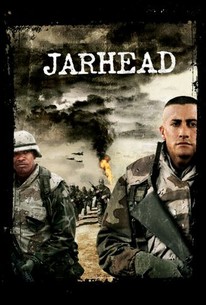 Critics Consensus: This first person account of the first Gulf War scores with its performances and cinematography but lacks an emotional thrust.

Critics Consensus: This first person account of the first Gulf War scores with its performances and cinematography but lacks an emotional thrust.

Critic Consensus: This first person account of the first Gulf War scores with its performances and cinematography but lacks an emotional thrust.

"Jarhead" (the self-imposed moniker of the Marines) follows Swoff, a third-generation enlistee, from a sobering stint in boot camp to active duty, sporting a sniper's rifle and a hundred-pound rucksack on his back through Middle East deserts with no cover from intolerable heat or from Iraqi soldiers, always potentially just over the next horizon. Swoff and his fellow Marines sustain themselves with sardonic humanity and wicked comedy on blazing desert fields in a country they don't understand against an enemy they can't see for a cause they don't fully fathom.

Gyllenhaal can, in fact, act, so the blame must fall elsewhere for his dim performance, all topless tears and soulful voiceovers. The same goes for Peter Sarsgaard, Chris Cooper and Jamie Foxx, three good actors forced into contortions of theatrics.

It's another fine Gyllenhaal performance, but not really enough, because his suffering doesn't amount to a hill of Kuwaiti sand in the end.

The film's strong suit is vagueness, presenting combat as a semi-surreal state of ignorant expectation and dislocated experience: these warriors loll in the desert awaiting action or trying to make sense of its consequences.

Jarhead takes a perverse pleasure in confounding your expectations of what a war movie should be.

Stunning to look at and to listen to, with elegantly chosen pop songs unspooling on the soundtrack under each fresh new horror.

Jarhead aims to provide the eternal reason why young men are drawn to war, like moths to the flame. Swofford and director Sam Mendes stress that to most young GIs, even the most fervently created antiwar film is a fighting man's pornography.

These soldiers wanted action, any action, just to feel justified for the life they left behind and Mendes does a great job of showing that anguish. The cast is excellent, too.

A tedious film with an utterly unlikable protagonist.

For some it's an anti-war message, for others it's just a non-biased portrait of a man who never went to war despite being in the military during war time.

Sporadically entertaining, and ultimately pointless -- although that seems to be its agenda right from the start.

Interestingly, a war film about training for a war that kinda never happens. Fully aware and borrowing heavily from Apocalypse Now and Full Metal Jacket, the cast trains and prepares but never actually see combat. So the film focuses on how frustrating that can be.

Upon first viewing, 'Jarhead' is no more than a portrait of the psychological challenges of a boring war. Yet, after the credits role, this film settles into your stomach and mind and doesn't leave. Sam Mendes creates a beautifully terrifying atmosphere with amazing cinematography and a strong cast of actors, with Gyllenhaal, Foxx, and Sarsgaard showing true talent. This film is not a trigger-happy gun show, but instead a poignant portrayal of soldiers battling themselves instead of the enemy. It's refreshing to see a great filmmaker give a unique turn on the modern 'war' genre.