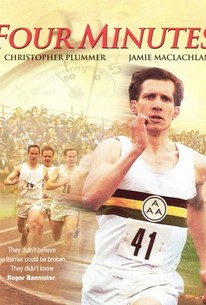 Set largely in England (but filmed in Canada), Four Minutes is the story of Sir Roger Bannister, doctor by profession and runner by preference -- and the first man to run under a four-minute mile. Played by Jamie Maclachlan, Bannister is accurately depicted as a brilliant Oxford medical student, who in the years following WWII gains a reputation as England's fastest runner, but who regards his sports accomplishments as merely an adjunct to his studies, and thus avoids formal athletic training. Only after he fails to win a medal at the 1952 Helsinki Olympics does Bannister come to realize how important he has become as a morale-booster for a postwar Britain plagued by shortages, rationing, and unemployment. Shouldering this spiritual responsibility, Bannister submits himself to a grueling (but surprisingly scientific) training regimen imposed by disabled ex-athlete Archie Mason (Christopher Plummer). Originally slated for release in 2004 to commemorate the 50th anniversary of Roger Bannister's "great run," Four Minutes was not seen until it was picked by the ESPN2 cable service on October 6, 2005.

There are no critic reviews yet for Four Minutes. Keep checking Rotten Tomatoes for updates!

There are no featured audience reviews yet. Click the link below to see what others say about Four Minutes!