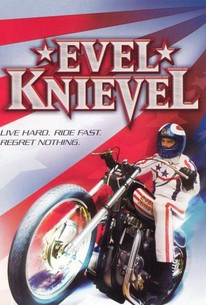 Robert Knievel was a young man with a wild streak and a love for motorcycles who found a way to make the most of both when he got a motorcycle and learned to do tricks with it. As Knievel's stunts became more elaborate, he gained the nickname "Evel," and he put together a team of fellow stunt riders known as Evel Knievel's Motorcycle Daredevils. By the end of the '60s, Evel was the most famous stunt rider in the world. Despite suffering more than his share of injuries (including a close brush with death after missing his exit ramp while jumping over the fountain at Caesar's Palace in Las Vegas), in 1974 he attempted the greatest feat of his life -- jumping over Idaho's Snake River Canyon in a specially designed rocket car. This take on Knievel's story is a made-for-cable biopic that looks at the public and private lives of America's supreme daredevil. George Eads stars as Knievel, while Jaime Pressly plays his wife Linda and Beau Bridges co-stars as her father. This was the second feature film about Knievel's life; George Hamilton played the stunt rider in a 1971 film also called Evel Knievel, while Evel Knievel played himself in the movie Viva Knievel!.

There are no critic reviews yet for Evel Knievel. Keep checking Rotten Tomatoes for updates!