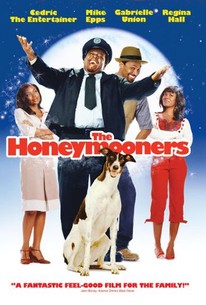 Critics Consensus: This pointless remake of the classic TV series only offers generic characters and gags.

Critics Consensus: This pointless remake of the classic TV series only offers generic characters and gags.

Critic Consensus: This pointless remake of the classic TV series only offers generic characters and gags.

One of television's most beloved sitcoms gets an overhaul for the big screen in this comedy. Ralph Kramden (Cedric the Entertainer) is a New York City bus driver who has great ambitions and plans to make something of himself one day. However, Ralph's big ideas usually take the form of half-baked get-rich-quick schemes which invariably fail, much to the chagrin of his long-suffering wife, Alice (Gabrielle Union). But Ralph always has a loyal ally in his best friend and upstairs neighbor, Ed Norton (Mike Epps), a sewer worker who also has a wife who is weary of his antics, Trixie (Regina Hall). Alice and Trixie have a plan to come up with the down payment for a dream house: a suburban duplex that's being eyed by a shady developer (Eric Stoltz). But when Ralph and Ed decide to spend their savings on training a stray mutt for the New Jersey dog races, they threaten both couples' futures. Based on the classic Jackie Gleason and Art Carney series, The Honeymooners also stars John Leguizamo.

Cedric the Entertainer
as Ralph Kramden

Bern Deegan
as Chip
View All

News & Interviews for The Honeymooners

View All The Honeymooners News

Critic Reviews for The Honeymooners

It could be part-autobiographical for director John Schultz who blunders through a tediously half-baked plot and fails to make it pay off.

The comedy wannabe has the lamest, most predictable banter of any recent movie.

The real problem is that the Kramdens' precarious financial situation, which gave the original its poignant frisson, is sidestepped.

I like the cast. They're very talented, they're really funny, they have a dreadful script to work with.

John Leguizamo steals the show as its sleazy trainer -- not that there's much to steal from John Schultz's joylessly schematic paycheck.

There's plenty of space up there for a colony of mediocre filmmakers. That's right, folks. To the moon. Bang! Zoom!

The Honeymooners isn't awful, but it is pure sitcom fodder.

There are two ways to look at the big-screen adaptation of The Honeymooners - as an adaptation of the show, and as a film in it's own right. Either way it's a film that occasionally works, but never manages more than that.

The script (credited to four screenwriters) uses a plethora of already-dated urban inside humor that reeks of pandering.

A disconnected series of skits and one-liners likely to satisfy children while only infuriating nostalgic adults in search of the magic of the Fifties sitcom.

A stroll down sitcom memory lane in name only, The Honeymooners seems as if any resemblance to the original TV classic could only be accidental.

Fans of the original series probably won't care for it, and the rest of us could probably get the same kind of entertainment in our living rooms, for free.

Audience Reviews for The Honeymooners

This movie shouldn't even have been made, it's kind of arrogant by everyone involved.

A Man With A Plan To Make It Rich Working class New York bus driver Ralph Kramden is always coming up with get-rich-quick schemes for him and his best friend, Ed Norton, who's always around to help him get in (and out of) trouble. Ralph Kramden and sanitation engineer Ed Norton are best friends whose schemes are the only things bigger than their dreams. The most recent get-rich-quick plan finds the boys out to make a fast buck by training and racing a stray greyhound. When Alice's dream of buying a home looks like it could become a reality, the Kramdens team up with their best friends who live upstairs, Ed and Trixie, to amass the $20,000 for a down payment before a shady land developer beats them to it. The Honeymooners gives a few nods to the original series, like Ed's trademark hat, and a sweet twist on Ralph's signature line: instead of threatening to knock Alice to the moon, he promises to take her there someday.

A Complete and Original "Tv-Show turned Movie, and Maybe that's why it was only as half as good as a normal half and hour Sit-com?