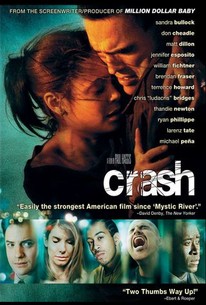 Critics Consensus: A raw and unsettling morality piece on modern angst and urban disconnect, Crash examines the dangers of bigotry and xenophobia in the lives of interconnected Angelenos.

Critics Consensus: A raw and unsettling morality piece on modern angst and urban disconnect, Crash examines the dangers of bigotry and xenophobia in the lives of interconnected Angelenos.

Critic Consensus: A raw and unsettling morality piece on modern angst and urban disconnect, Crash examines the dangers of bigotry and xenophobia in the lives of interconnected Angelenos.

Issues of race and gender cause a group of strangers in Los Angeles to physically and emotionally collide in this drama from director and screenwriter Paul Haggis. Graham (Don Cheadle) is a police detective whose brother is a street criminal, and it hurts him to know his mother cares more about his ne'er-do-well brother than him. Graham's partner is Ria (Jennifer Esposito), who is also his girlfriend, though she has begun to bristle at his emotional distance, as well as his occasional insensitivity over the fact he's African-American and she's Hispanic. Rick (Brendan Fraser) is an L.A. district attorney whose wife, Jean (Sandra Bullock), makes little secret of her fear and hatred of people unlike herself. Jean's worst imaginings about people of color are confirmed when her SUV is carjacked by two African-American men -- Anthony (Chris Bridges, aka Ludacris), who dislikes white people as much as Jean hates blacks, and Peter (Larenz Tate), who is more open minded. Cameron (Terrence Howard) is a well-to-do African-American television producer with a beautiful wife, Christine (Thandie Newton). While coming home from a party, Cameron and Christine are pulled over by Officer Ryan (Matt Dillon), who subjects them to a humiliating interrogation (and her to an inappropriate search) while his new partner, Officer Hansen (Ryan Phillippe), looks on. Daniel (Michael Pena) is a hard-working locksmith and dedicated father who discovers that his looks don't lead many of his customers to trust him. And Farhad (Shaun Toub) is a Middle Eastern shopkeeper who is so constantly threatened in the wake of the 9/11 attacks that he decided he needs a gun to defend his family. Crash was the first directorial project for award-winning television and film writer Haggis. ~ Mark Deming, Rovi

Ryan Phillippe
as Off. Tom Hansen

Instead of heartwarming messages about forgiveness, it honours ambiguity and brings us close, closer than is comfortable, in fact, to what Americans today are really thinking about one another.

[Crash] is familiar enough that it slips easily into our film-watching faculty without any fuss, yet [Haggis'] handling of it -- his muscular belief in what he is doing -- makes us hope that his next screenplay will be a bit less safe.

Crash is a very watchable and well-constructed piece of work, and a potential script masterclass: but its daringly supercharged fantasies of racial paranoia and humanist redemption are not to be taken too seriously.

The script is clever, the racial theme is worthy of Newsnight, and the editing just sublime.

Set in a simmering cauldron of racial tensions where subtle nuance can cut as deep as unambiguous hostility, it's a powerful drama about the often bewildering contradictions that underlie human behaviour.

Ultimately, Crash succeeds in spite of itself. Its color war starts to feel obvious and schematic. Its coincidences and cliches become like a pileup on the 405 freeway, but there it is -- you find yourself rubbernecking and can't manage to look away.

This isn't a film for everyone. Crash demands your attention and really makes you think. It's a special film that is clearly among the best I have seen this year.

Thought provoking, compelling, intelligent, coherently crafted and reality based and laced. Look for Paul Haggis and his cast of characters to be on everyone's lips come Oscar 2006.

It's told with a searing panache that comes to a boil as characters are forced to confront their own prejudices.

Issues are raised and confronted head-on and prejudices are revealed simultaneously as the movie deftly assembles its intricately plotted narrative jigsaw.

Outside of the excellent cast doing their best in impossible situations, there's virtually nothing enjoyable or aesthetically admirable here.

Crash is difficult to watch because of the moral chaos it portrays, but it is best film I have seen in a long time.

A top quality film that follows the lives of varied people over 24 hours and how they "Crash" into each other. Quite original idea as well.

Pretty good movie which makes you think about racism. I especially felt sorry for the lock repair guy, it must get very wearying having people constantly assume the worst of you based on your nationality or skin colour. The old shop keeper guy annoyed the hell out of me, and Sandra Bullocks character. Many characters and stories in this, so it can be hard to keep straight which is which.

After re-watching this, I have to conclude that it did not deserve the Oscar for that year. Nevertheless, it is definitely worth watching.