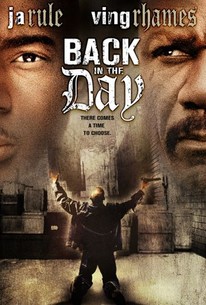 Back in the Day Photos

A young man is torn by divided loyalty in this hard-edged urban drama. Reggie (Ja Rule) was raised by his father (Giancarlo Esposito) after a violent incident in the neighborhood where he lived with his mother (Pam Grier). While Reggie has been encouraged to take up a life of crime by his older friend and street mentor J-Bone (Ving Rhames), his father thinks Reggie has a good head for business and urges him to use his smarts rather than his gun. When Reggie's father is murdered, J-Bone takes the young man under his wing, but as a consequence of their friendship, Reggie is linked to the killing of a local preacher -- whose daughter (Tatyana Ali) is Reggie's girlfriend.

Paul Benjamin
as Cody
View All

Critic Reviews for Back in the Day

There are no critic reviews yet for Back in the Day. Keep checking Rotten Tomatoes for updates!

Audience Reviews for Back in the Day

Decent crime drama, Ving Rhames made this movie. ...and Tatyana Ali and Tia Carrere are sexy as hell.

Back in the Day Quotes