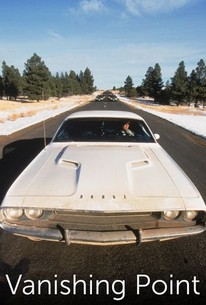 A Desert Storm veteran with a 1970 Dodge Hemi Challenger and a need for speed incurs the wrath of authorities when he makes a cross-country dash to be by the side of his ailing, pregnant wife in this remake of director Richard Sarafian's 1971 cult classic. Jimmy Kowolski (Viggo Mortensen) is a troubled man and devoted husband, and when his pregnant wife is suddenly hospitalized with labor problems the ex-race car driver punches the gas without hesitation. With vengeful state trooper Sgt. Preston (Steve Railsback) and the entire FBI riding his back bumper, Jimmy's only ally is fearless radio DJ The Voice (Jason Priestley) whose outspoken support finds the desperate driver becoming a national folk hero. As Jimmy races ever-faster toward an impenetrable police roadblock with the single-minded goal of being there for his wife in her moment of need, the law closes in for one final showdown on the open highway.

Jason Priestley
as The Voice

Rodney A. Grant
as Edward Sunsinger

...pretty entertaining, provided you don't think about it too much...

There are no featured audience reviews yet. Click the link below to see what others say about Vanishing Point!