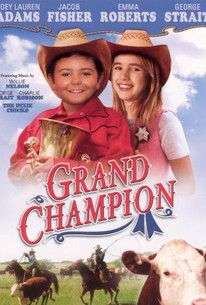 A boy trying to do the right thing for his family loses his closest companion and decides to do something about it in this comedy-drama for the whole family that was shot on location in Texas. Buddy (Jacob Fisher) is a young boy being raised by his single mother Hallie (Joey Lauren Adams) on a small ranch in the Lone Star state. Buddy has been taking care of a young steer he calls Hokey Pokey, and while at first the animal is more of a pet than anything else, with hard work and encouragement Buddy is able to groom Hokey Pokey into a prize-winning steer who wins the Grand Champion award at a major rodeo livestock show. Hokey Pokey is purchased for 775,000 dollars at a livestock auction, which will allow Buddy and his sister to attend college and make life at home a lot easier for his mother. But when Buddy is told that Hokey Pokey's new owner plans to turn the steer into an especially large order of barbecue, he decides he can't let his four-hoofed buddy die, and with the help of his friends he hatches a scheme to kidnap the steer. Grand Champion features cameo appearances from country music stars George Strait, Natalie Maines (of the Dixie Chicks), and Robert Earl Keen, as well as several top rodeo riders.

George Strait
as Himself

This low-key family drama is so hokey that its title character is named Hokey.

Doesn't leave you wishing you could get your money back.

Cute for a G movie. A little cheesy, but that's to be expected. I enjoyed it aside from the part where the boys were "on the run" with the steer - that was a little boring and long, but otherwise it wasn't bad.