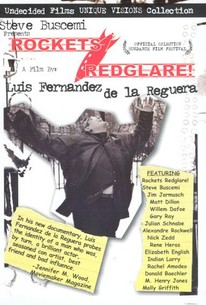 Luis Fernandez de la Reguera directs the documentary Rockets Redglare!, a portrait of the New York personality from his early days around '50s hustlers to the East Village crowd of the '80s to his tragic death in 2001. Born Michael Morra in 1949, Rockets Redglare is a creative personality, enthusiastic performer, and a serious survivor. A life-long scenester, Rockets could be called many things, not the least of which are standup comedian, bodyguard, drug dealer, and actor. Features interviews with associates and co-stars Steve Buscemi, Willem Dafoe, Matt Dillon, Jim Jarmusch, and Julian Schnabel. Also includes home movies, film clips, and archive footage.

The film goes on too long, repeats itself and has a reality-TV tendency to wallow in the tawdry.

Much of the movie drag.

Maybe the world has just seen too many outrageous East Village characters at this point, but Morra comes off as nothing special.

There's a human tragedy here waiting to be told; what we get, however, is a sordid, grotesque freak show.

The cheap-looking video won't win any Kodak awards, yet it's an appropriate compliment to the squalor of Redglare's biography.

There are no featured audience reviews yet. Click the link below to see what others say about Rockets Redglare!!