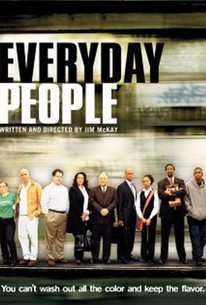 Independent filmmaker Jim McKay (Girls Town) writes and directs the ensemble film Everyday People, produced in part by HBO Films. The story revolves around a neighborhood eatery in Brooklyn called Raskins, a Jewish-owned-and-operated restaurant with an almost exclusively black clientele. After years of faithful service, owner Ira (Jordan Gelber) contemplates selling out to a corporation as part of the city's urban renewal. Everyday People premiered at the Sundance Film Festival in 2004 as part of the American Spectrum competition.

Warner Miller
as Beadle
View All

My only complaint is that it feels more like a series pilot than a stand-alone film, but thumbs up.

It has an undeniable authenticity in its characterizations and situations and an empathy that is all too rare even in independent cinema.

The ensemble cast, asked to improvise its roles, interacts with conviction and chemistry.

It's Spike Lee with no special effects, Blue in the Face without the celebrity cast... There are no epic disasters here, but there is real tragedy.

I feel like a real heel for not being able to endorse this film enthusiastically and wholeheartedly, but there we have it.

Although ambitious...Everyday People is a disappointing step backwards for the filmmaker.

Appealing and interesting characters, but [McKay] spreads his film too thinly over too many of them, resulting in sketches, rather than portraits.

Vividly depicts the changes taking place in the lives of the working poor in Brooklyn now that the traditional safety nets no longer protect them.

There are no featured audience reviews yet. Click the link below to see what others say about Everyday People!