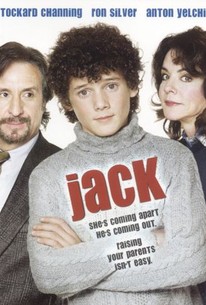 An adolescent who is sorting out his new sexual feelings is less than comforted by the example of his immediate family in this coming-of-age comedy drama. Jack (Anton Yelchin) is a boy in his early teens who is rolling headlong into puberty and trying to make sense of his feelings about girls, which are making themselves known at a less than opportune moment. Jack's parents, Paul (Ron Silver) and Anne (Stockard Channing), have just announced they're getting a divorce, which coincides with Paul's decision to come out as a gay man and move in with his boyfriend. Jack is certain his family has gone crazy, and tries to find suitable role models in his friends' families, although he soon discovers they have more than their share of their own troubles to deal with.

... a careful, confident, and finally convincing TV-movie version of the A. M. Homes novel...