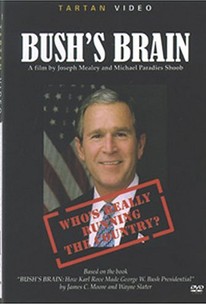 Critics Consensus: Most of the evidence is more circumstantial than conclusive, but it's still a disturbing portrait of misuse of political power.

Critics Consensus: Most of the evidence is more circumstantial than conclusive, but it's still a disturbing portrait of misuse of political power.

Critic Consensus: Most of the evidence is more circumstantial than conclusive, but it's still a disturbing portrait of misuse of political power.

Filmmakers Michael Paradies Shoob and Joseph Mealey offer an in-depth look at the man many regard as the brains behind George W. Bush's political career -- Karl Rove, a political strategist who has been described as having a "junkyard-dog approach to politics." Bush's Brain is a documentary which follows Rove's career from high school (when he was accused of using dirty tricks to win debate competitions) through his guidance of Bush's campaigns for Texas governor and United States president (during which he used aggressive strategies to discredit Bush's opponents) to his role in the Bush White House and his possible links to the scandal in which the status of Valerie Plame as a longtime covert CIA operative was leaked to the press. Bush's Brain was based in part on the book Bush's Brain: How Karl Rove Made George W. Bush Presidential by James C. Moore and Wayne Slater; the film was shown at the 2003 South by Southwest Film Festival.

The accusations are alarming and juicy enough to strike up a watchable combo of fear and gall.

Littered with sloppy accusations and one-sided arguments, Bush's Brain, like so many political documentaries of late, is transparently manipulative.

They succeed in presenting a compelling series of dots, to use the current parlance, but they don't succeed in connecting them.

An entertaining, if not entirely convincing story about Karl Rove, President Bush's campaign manager, and allegations of dirty tricks.

The movie has no smoking guns, but its circumstantial evidence is quite damning and it traces Rove's political hardball back to Texas state politics.

There are no featured audience reviews yet. Click the link below to see what others say about Bush's Brain!